Here's the review of 'Saala Khadood'! 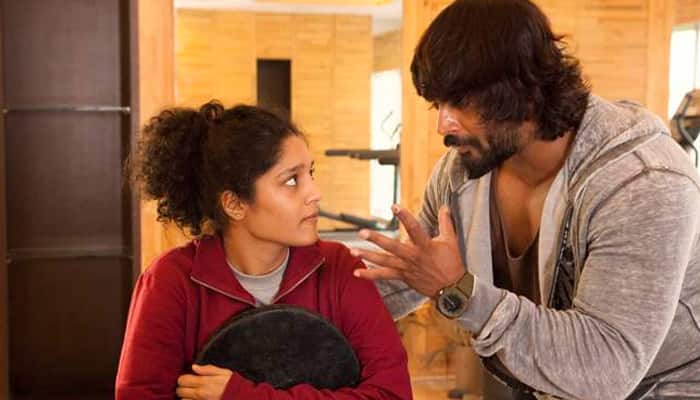 First things first – Sudha Kongara's hard-earned movie 'Saala Khadoos' is the first sports drama of 2016. Yes, probably not as bouyed in the market as the forthcoming biggies – 'Sultan' and 'Dangal' – but a sports flick tracing the life of a man, and a young girl both inside and outside the shoddy, roughed-up terrain of the boxing ring.

Going straight to the plot – there's not much in store. Except this is a story of how a disgraced Women's Boxing coach (R Madhavan), who is also an erratic and loud person in real life, strikes up an unusual camaraderie with an equally blatant and foolhardy fisher woman. But this is no love story we are dealing with, actually Adi (Madhavan) sees a potential boxer in Madhi (Ritika Singh) and pursues her with a salary of Rs 500 every day – to talk her into being trained under him (hoping this might also save him from his tiff with the head coach – who dismisses him to Chennai in fake accusation of sexual harassment).

The two face off with equally tempestuous energies and rage, but eventually it is Madhi who overpowers Adi in imprudence. No wonder, this goes against the over-celebrated saying: opposite attracts. Tough coach rests his faith on the young, wild potential boxer – and drama ensues.

The direction could be easily blamed for generating repetitiveness, but I beg to differ. I wouldn't call this bad direction, but just a different treatment. One of the issues with the film is the insistent soundtracks – although at times it only propels the narration, there are those moments when the bombardment of music breaks your focus on the script. Tame down the abrasive narration a bit too, may be?

That said, no, I wouldn't compare it with erstwhile sport dramas – neither with 'Chak De! India' with which it has the highest semblance. And I would do it to keep the substance alive, and original. We often run into making these sheer comparisons - refusing to redeem the efforts put into making a particular movie.

Coming to the favourite part in the movie- it's the lead actors who give the real knockouts! Be it R Madhavan's beefed-up, macho coach avatar, he makes us believe he can play the entire opposite of the mellow, henpecked hubby in 'Tanu Weds Manu' series.

And we love him this way too! Ritika Singh is another part in the movie which owes an analysis. She may not be a leggy lass with a scarlet mouth, but she has redefined the definition of beauty and shrewdness.

For me she is the new sexy. Every time she packed a punch, boy, did she look like someone who could topple any muscle man with ease. She definitely brought in a stream of freshness with a make-up free avatar.

Music, screenplay are both okay – but the narration runs bare at times. So, coming to the conclusion, are you wondering if the khadoos managed to pull a smile in the end?

Well, he did and with such a powerful climax! This sports drama will stay with you if you can embrace it for its lead performance. To put it more aptly, the leads definitely pack a punch!