Impossible Rogue Bacon' and 'The Fast and The Furriest', the brilliant spoof-filled posters of "Shaun the Sheep", although not related to these films, are bound to entice you. And if not, the film surely will. 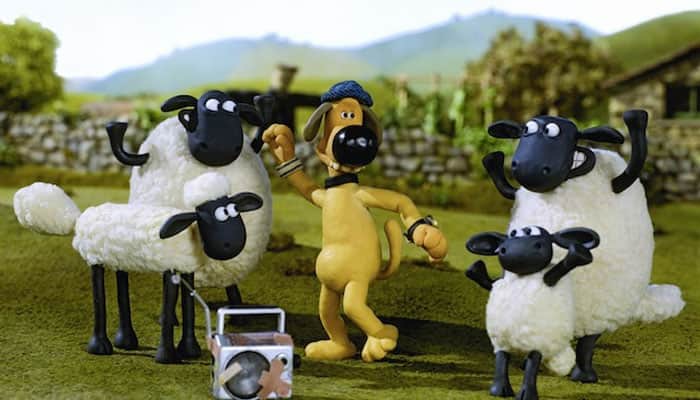 'BaaHood', 'Mutton: Impossible Rogue Bacon' and 'The Fast and The Furriest', the brilliant spoof-filled posters of "Shaun the Sheep", although not related to these films, are bound to entice you. And if not, the film surely will.

"Shaun the Sheep" is a meticulously planned stop-motion Claymation film, closely based on the British TV series of the same name.

It is built around a simple storyline and simple pleasures, befitting its target audience. Beneath its pitch-perfect simplicity, lies great wisdom and beauty.

The narration rolls off with a rhythmic montage revealing the mundane lifestyle of the farmer and his animals, which include the sheep, the sheep dog, the pigs and the bull at Mossy Bottom Farm.

Our story is set in motion when the free-spirited, precocious Shaun, a sort of diminutive dreamer among the flock of sheep, finds himself bored by the routine of daily farm life.

One day a bus rolls by with an advertisement on its side which reads, "Take A day off". It catches Shaun's attention. So, he gets a bright idea of breaking their monotonous grind with some excitement. He along with the rest of his flock gets into action. They lull the farmer to sleep by making him count the sheep, literally, until he dozes off.

What follows is an unexpected turn of events that take the farmer, his sheep dog and the sheep to the "Big City". It is their adventure in the city that mesmerises you and keeps you enthralled.

Written and directed by Mark Burton and Richard Starzak, the film is delightfully engaging with constant and frequently hilarious gags sans any discernible speech. The characters do enhance the lack of speaking voices, by punctuating their actions with bleats, sighs, grunts, muttering and other garbled sounds that make sense in conjunction with their movements.

And the gags range from simple 'trip and fall' slapstick comedy to the sheep disguising as humans and imitating them in a restaurant to elaborate sequences that hinge on chaos.

The film, with its fine production quality, is visually colourful. The animation along with the background artwork contributes individually to the whole. The frames move seamlessly and flawlessly in line with the brilliantly composed background score by Ilan Eshkeri, giving you a wholesome viewing experience.

Overall, this film will literally appeal to the whole family. While the children will giggle and enjoy the antics, the adult audiences will be awestruck by the finer nuances of the characters and the homage paid to some older films.

A definite holiday weekend treat for the younger ones!