He visited the Loktak Llake and went to lake islet Pabot Ching to see the proposed developmental works. 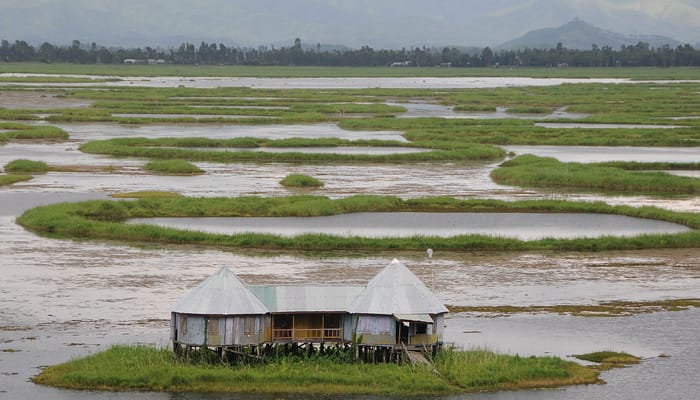 Imphal: In a move that would boost the tourism sector in the northeastern state of Manipur, Union Minister of State for Environment, Forests and Climate Change Anil Madhav Dave on Thursday said that the Centre will develop the Loktak Lake - the largest fresh water body in eastern India.

Talking to reporters at the conclusion of his two-day official visit to the border state, he said: "As soon as I reach Delhi I shall be in touch with all Ministries which are connected with the project. I will even take the issue to the United Nations."

The ancient lake, which plays an important role in the economy of Manipur, serves as a source of water for hydropower generation, irrigation and drinking water supply.

The minister also visited Keibul Lamjao National Park (KLNP) – the world's only floating national park - where the Sangai (brow antlered deer) lives. The KLNP , which is an integral part of Loktak Lake, park is characterised by many floating decomposed plant materials locally called phumdis. The national park is the only remaining natural habitat of ‘Sangai’ which was once found across the Manipur.

During his visit, the minister was briefed about the endangered species which lives on the floating park in the lake.

Later women of the BJP Mandal at Thanga, an islet in the lake, accorded him a warm welcome.

"People of Manipur are blessed with the largest lake while there is a shortage of water at many places."

During his brief speech, Dave extolled the rich culture and arts of Manipur and ensured that funds will not be lacking for the overall development of the northeastern states.