The tiger is known as ST-16 allegedly died on Saturday due to the overdose of tranquillizer. This tiger had recently been shifted from Ranthambore to Sariska and its death has left animal lovers sad and aggrieved over the callousness of Sariska forest officials. 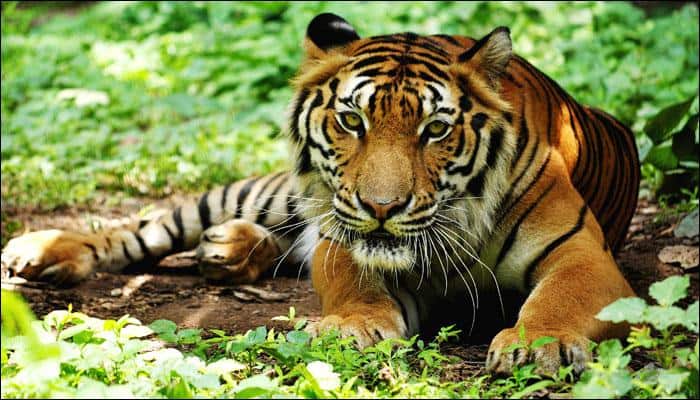 Jaipur: The death of a tiger in Sariska forest bespeaks a sad story of the royal animal being left on its own to survive amid many threats and challenges in its forest range, raising the need to start another Project Tiger in the country.

The tiger is known as ST-16 allegedly died on Saturday due to the overdose of tranquillizer. This tiger had recently been shifted from Ranthambore to Sariska and its death has left animal lovers sad and aggrieved over the callousness of Sariska forest officials.

However, this is not the first incident where Tigers' needs have not been focused on, said Harshwardhan, a renowned environmentalist. History has been a witness of how this royal animal is left to battle odd situations over the years. The animal has been telling a sorrowful tale of its existence, he said.

Going back to the era of the 19th century, Harshwardhan says, "Once upon a time, India had 100,000 tigers. However, this number kept dwindling as Britishers and the erstwhile rulers took up hunting. Despite the 1960s witnessed widespread hunting of tigers all over India, there was no comprehensive law to administer wildlife, he says.

Even Queen Elizabeth II of Britain along with her consort, Prince Phillip, who visited Ranthambhore at the start of the 60s, reportedly to shoot tigers, was hosted regally by the then government, he said.

Then came Project Tiger (PT) in 1973 where the WWF-International assumed a lead role.

However, forest officers did not know how to go ahead. Hence, a fudging practice was adopted to reflect increasing tiger numbers and showing their count at over 4,000.

Later, the National Tiger Conservation Authority (NTCA) was formed to monitor all field operators. However, now the tiger faces another challenge, its forest territories are shrinking thereby increasing the man-animal conflict.

Almost 10-15 tigers and tigresses are roaming outside almost all the best breeding reserves in India as dominant males do not let newly-born, young and sub-adult males to remain inside the park, says Harshwardhan.

These vagrant tigers face calamitous challenges in newly adopted 'homes' which are infested with rural folk and their livestock.

An additional population of tigers inside reserves, therefore, is getting rehabilitated outside the reserves. Further, tiger corridors are missing. The outcome: many wild tigers and tigresses are poached by rural folk, or get knocked down in road accidents and mishaps.

It needs mentioning that tigers ST 4 and ST 11 died in Sariska earlier. In fact, ST-11 was allegedly choked to death by hunters, ST-5 was poached and ST-4 breathed his last during a territorial fight with another tiger.

P.S. Somashekar, a retired forest officer from Rajasthan adds, "We might see the big cat numbers growing, but in reality, we are losing the battle."

"There was a time when the stories of man-animal coexistence sounded real. This was in the 70s and 80s but now it is a thing of past. The development of areas around jungles, four-lane highways, electricity, the sound of bikes and jeeps many a time prompt these animals to come out of their peripheries."

As the tiger is a carnivore, it needs regular movement from one area to another, however, we have created obstructions in its movement area, he said.

"The government land has been converted into agricultural land, agricultural land into commercial land and so on. Hence when the animal moves into corridor areas, it gets confused on seeing four-lane highways, dazzling lights and sounds, leading to conflict," Somashekar said.

So is it time to start another Project Tiger asks Harshwardhan.

India may have witnessed worst-ever summer