The pair were spotted by Joop Van Der Linde, a guest at Ndutu Safari Lodge in Tanzania's Serengeti National Park, reports the BBC. 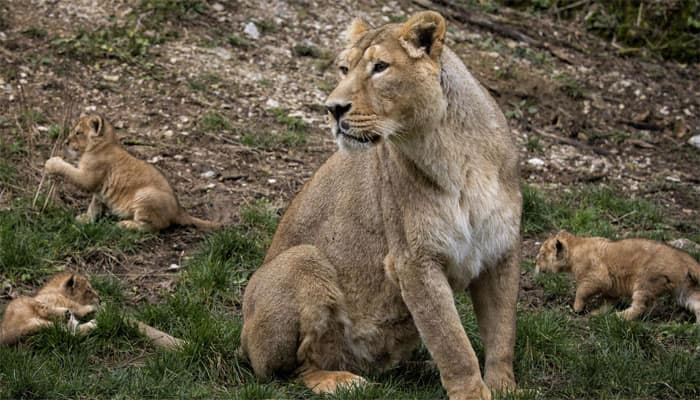 Dodoma: Photos have emerged of a lioness nursing a baby leopard, a first of a kind sighting deemed as an extremely rare event, the media reported on Friday.

The pair were spotted by Joop Van Der Linde, a guest at Ndutu Safari Lodge in Tanzania's Serengeti National Park, reports the BBC.

The five-year-old lioness named Nosikitok has a GPS collar fitted by Kope Lion, a conservation NGO, and three young cubs of her own born late last month.

"It's not something that I'm aware has ever happened before between large cats like this," he said.

"We know there are cases where lionesses will adopt other lion cubs... But this is unprecedented."

Most lionesses would normally kill a baby leopard if they found one, seeing just another predator in a competitive food chain.

She was around a kilometre from her den, where her own cubs are hidden, when she found the spotted substitute.

"She's encountered this little cub, and she's treated it as her own. She's awash with maternal hormones, and this fierce, protective drive that all lionesses have, they're formidable mums," the lion expert noted.

Newly-designed solar cell may be most efficient in the world, claim scientists