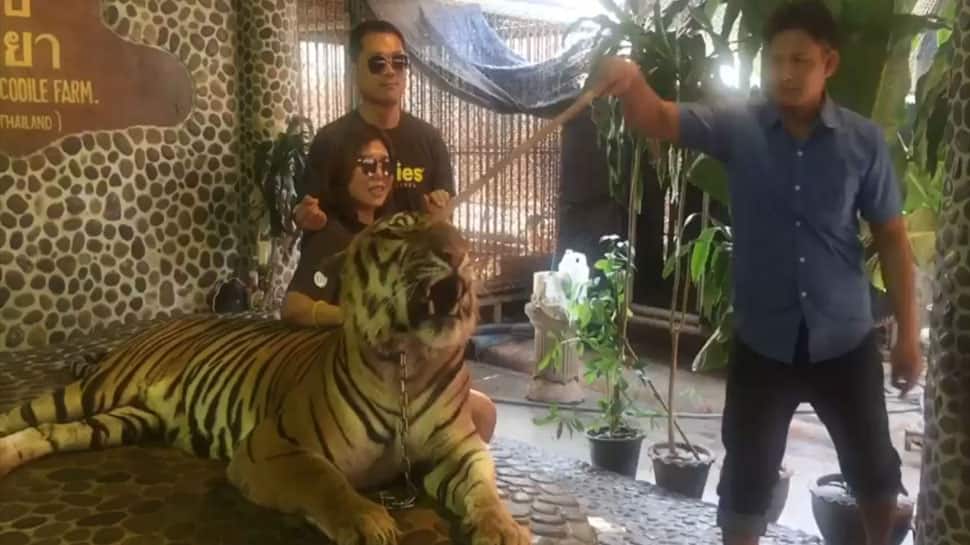 New Delhi: A video captured in a Thai zoo has incurred the wrath of people across social media boards, showing a member of the zoo staff repeatedly prodding a tiger to elicit roars for tourist photos, renewing criticism of the kingdom's notorious animal tourism industry.

The clip was posted on December 18 and has garnered more than one million views since.

As the Pattaya zoo attendant pokes and jabs the chained big cat in the face with a stick, tourists take turns posing with or sitting on top of the big cat for pictures.

"This tiger gets poked all day, hundreds of times a day so it will roar for the picture with tourists," wrote Edwin Wiek, the founder of Wildlife Friends Foundation Thailand, who filmed the video and posted it on Facebook.

Check out the video below:

A spokesman for the zoo, The Million Years Stone Park and Pattaya Crocodile Farm, told AFP the tiger attendant had been transferred to another job over the incident.

"The owner, he loves animals and he will not allow staff to hurt his animals," she added.

Tourist dollars and the lure of the animal selfie fuel a lucrative but controversial wildlife tourism industry in Thailand, where opportunities to ride elephants, hold monkeys and pet tigers are all available for a price.

Animal rights groups have long criticised the industry as inhumane, with chained up animals kept in small quarters with inadequate diets or veterinary care.

"We believe that the taking of selfies with wildlife should be stopped completely," Wiek told AFP, adding that such behaviour is also risky for humans.

"Every year hundreds of people are bitten or clawed in similar situations." In 2016 the kingdom made international headlines after police raided its infamous Tiger Temple, a tourist site accused of links to the illegal wildlife trade.

A July report by World Animal Protection said Thailand was the global epicentre of the elephant tourism industry, with the majority of its 2,198 tourist pachyderms held in inadequate conditions.

Thailand is known for its wildlife tourism. From selfies with tigers and elephant rides to orangutan boxing, Thailand has a lot to offer as tourist attractions.

Animal rights activists and environmentalists, however, have a different take on these services, saying that are cruel and should be shut down.

The Tiger Temple raid, that took place in June last year in Thailand, unmasked a horrifying reality when the Department of National Parks, Wildlife and Plant Conservation discovered the remains of over 40 tiger cubs in the temple's kitchen freezer, while also rescuing 137 tigers.

The discovery led to an arousal of suspicion among wildlife authorities directed at other tiger attractions as well.

Penguins existed much before than earlier thought. Scientists reveal details