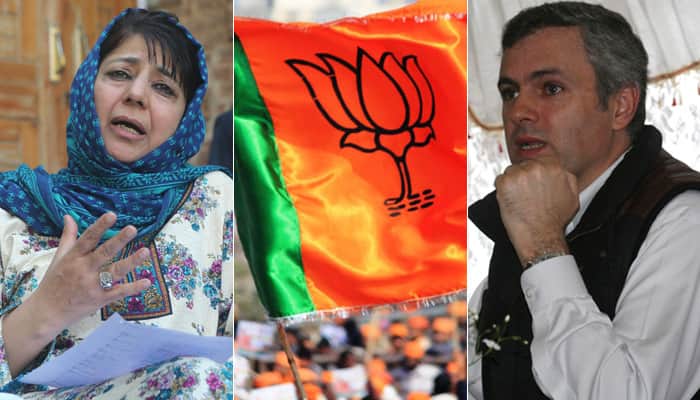 Ajith Vijay Kumar: Looks after national and world affairs, education and viral content for Zeenews.com. Decoding “what works on the web” is his lifelong passion.

Touted as a watershed moment in the political history of Jammu and Kashmir, the upcoming assembly elections promise to change the electoral dynamics in the state that has, for long, struggled to join the national mainstream.

The ruling National Conference (NC) is fighting this battle with its back to the wall. Having broken off the alliance with the Congress and faced with desertions, Omar Abdullah has limited options to prevent the rise of Mehbooba Mufti of People's Democratic Party (PDP).  The Congress too has limited hopes, but may end up as a deal maker in any future government.

Te BJP with its 'Mission 44' is working to ensure that lotus blooms in the Dal Lake – a proposition that would have seemed impossible before the party got the wings to soar with the 'Modi wave'.

While opinion polls have suggested that no party would be able to secure a majority, the PDP is said to be better placed than the rest to emerge as the single largest party.

The BJP is expected to do well, especially in Jammu and Ladakh regions to come a close second. The other two big parties may be left with little option than to align with others.

Congress' campaign chief in Jammu and Kashmir, Ghulam Nabi Azad has held talks with Mufti Mohammad Sayeed, which suggests realignment. Also, the National Conference is reportedly coming closer to the BJP, once again.

Independents and other smaller parties may also end up playing a big role in deciding who gets to rule Jammu and Kashmir for the next six years.

But with many emotive issues and a belligerent Separatist lobby, the equations may change in the coming days, especially because the polls are to be held in five phases spread over a month.

Though the BJP has decided to soft peddle its strong views supporting the abolition of Article 370 of the Constitution which gives special status to Jammu and Kashmir, the issue remains at the Centre of the political debate in the state.

PDP chief Sayeed has dubbed the elections as a “defining moment” in the endeavour to “safeguard” the distinct Constitutional position of the state.

The other favourite issue of some J&K parties, especially the PDP, has been the call for 'Self-Rule'. Mufti's party has in fact prepared a detailed documents outing its position on the issue.

However, lately, the party has not been harping on the demand and has recalibrated its position to one that speaks more of economic development.

And add to that, the pro-Pakistan tilt of the Hurriyat, the issue remains at the core of politics in the state.

The BJP has largely based its poll agenda around the central theme of growth and development. It's an issue that finds resonance across the country, as was amply displayed by the stunning success of Narendra Modi in the Lok Sabha elections.

'Vikas ki Rajneeti', as Modi puts it, is an poll pitch that can't go wrong, especially since it is early days to judge his government's performance, unless there are other pressing local issues.

The PDP sensed the mood and has started to talk about development oriented agenda that goes further than its pet theme of self-rule.

The National Conference, after six years in power, has much to explain on its achievements on the front, especially when it had a friendly UPA dispensation at the Centre.

The change in the government at the Centre and its emphasis on ensuring the return of Pandits to their ancestral land has reinvigorated hope in the community that they will get justice.

As a symbol of the impending change, Pandits are said to be actively registering themselves as voters in the valley. Several Kashmiri Pandit organisations have united to demand a "blueprint for rehabilitation" of the exiled community from national and regional political parties contesting the elections.

The rehabilitation work carried out by the Abdullah government after nature's fury played out in Kashmir as floods would also emerge as a factor when people go out to vote.

With anger among the affected families over compensation amount - Rs 75,000 for fully damaged houses, Rs 12,500 for severely damaged houses and Rs 3,800 for partially damaged houses – the state government had been struggling to ensure that there should be no adverse effect on its electoral fortunes.

The role of security forces, especially of the Army, has been in focus in the state ever since militancy ripped apart the social fabric of the society. Political parties have impressed upon the people to take it as a sign of the high-handedness of the State.

The recent killing of Kashmiri teens in Budgam and the conviction in Machil encounter case has once reignited the debate over Armed Forces Special Powers Act (AFSPA).

While J&K parties have been united against it, former Home Minister P Chidambaram stirred the hornet's nest recently when he dubbed AFSPA as an “obnoxious law”.

The BJP was quick to slam Chidambaram with former army chief and now minister in the Modi government VK Singh defending AFSPA, saying the law had not prevented the conviction of those guilty in the Machil case.

Certainly, it is an emotive issue in the Valley and the BJP would want to tread carefully as it worked to realise its 'Mission 44'.

But does BJP really stand a chance in Jammu and Kashmir? Here's a look at how parties stack up against each other.

Though no party would tread on the issue, the competition between Jammu and Kashmir regions is one of the most fundamental political fault-lines in the state. While the BJP is gaining strength in Jammu, primarily at the expense of the Congress, the NC and PDP have their respective strong areas in the Valley.

The issue becomes critical when it comes to chief ministership. It's an emotive issue, something even Ghulam Nabi Azad, from Jammu, found difficult to assuage, during his tenure in the hot seat.

For a party that has never won a seat in Kashmir valley, the target of forming a government on its own, or at least, leading a coalition would have seemed far fetched even some months ago – before Modi stormed the Red Fort, to be precise.

The BJP, post May 16, has reinvented itself. Driven by Modi's single minded focus and Amit Shah's management skills, the saffron party is spreading its wings fast.

Given its stunning performance in the Lok Sabha polls when it won three – two in Jammu and one in Ladakh - out of the six Lok Sabha seats in the state, the party is confident of putting up a good show in the region and cornering majority of the seats there.

The challenge would be to open its account in the valley. The BJP appears to be working on a three-pronged approach to make its presence in the valley.

The BJP is going to the electorate with Modi's slogan 'Sab Ka Saath, Sab Ka Vikas' and the promise to free the state from its dynasties. It remains to be seen if the Valley is impressed by his developmental agenda, especially after the Prime Minister chose to visit the border and flood affected areas on Diwali.

The other where the party hopes to make big gains is the Chenab Valley, which comprises of Kishtwar, Doda, and Ramban districts.

The PDP sees the upcoming polls as a real opportunity to occupy the central place in state's politics, especially in the valley. Undoubtedly, the party enjoys people's support, especially in South Kashmir.

With opinion polls predicting its emergence as the single largest party, the PDP is leaving nothing to chance this time. Party leaders have been strongly pitching the need to save the constitutional status of the state.

Importantly, the party is watching with trepidation the rise of BJP with party leaders saying that there is 'Mufti wave' and not 'Modi wave' in the state.

Omar Abdullah is hopeful that the party would win based on the 'good work' done by his government in the last six years.  However, with many senior leaders like Mehboob Beg and Sheikh Ghulam Rasool deserting the National Conference, Abdullah's options appear limited.

Interestingly, amid reports that the NC has gone soft on the BJP, Abdullah candidly admitted the presence of a 'Modi wave'.

It remains to be seen whether the NC will take another U-turn and rejoin the NDA fold both in the state as well as the Centre.

With 17 MLAs in the outgoing assembly and having shared power with the NC, the Congress should have been in a better situation than what it is in today.

The despondency that had set in the party rank and file after the Lok Sabha polls rout is yet playing spoilsport with the party's chances.

Also, it has not helped that senior leaders like Ghulam Nabi Azad, who is leading the campaign, are calling its alliance with the NC as a bad experience. It appears the party is yet to learn from it Lok Sabha folly of doing negative politics.

The best case scenario for the Congress would be to get into an alliance with the PDP. Both parties have shared power in the past when Azad and Mufti Sayeed became CMs under a rotational agreement.