Why Cristiano Ronaldo is better than Lionel Messi! 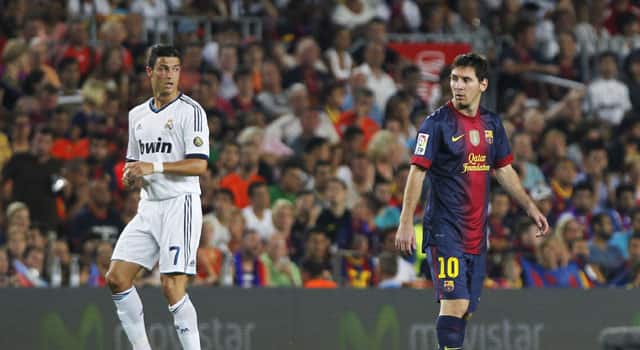 As the Spanish football league known as the La Liga opens to a new season, excitements are already high as to which team will hold aloft the trophy by next May. Will Real Madrid retain the cup they won over from Barcelona or will Barca regain it? A tough question considering the league’s just starting.

And while La Liga is known for its tactical smooth football style, it also has the two best players in the world right now - Cristiano Ronaldo and Lionel Messi. This automatically brings us the debate of who’s a better player between the two.

Perhaps, this is the biggest question in the world of football at present, and it is likely to remain so for a few more years.

Fans of both the players have claimed their favourite as the greatest player. However, to compare these two players who are completely different in style, both on and off the field, is actually a very difficult task. While Messi is known for his talent and fluency, Ronaldo is known for his sheer passion. Besides, these two players play for two different teams in the La Liga that are known for their different style of play too.

Therefore, comparing these two players as to who is better is a difficult task. Critics and fans say different things about these two ‘different’ players thus claiming one to be better than the other. However, there are certain reasons why Cristiano Ronaldo is a better player at the end of the day.

Ronaldo is a winger, not a striker

So, Messi has scored more goals that Ronaldo in the 2011-12 season. But what one has to realise here is that Messi is a forward/striker where as Ronaldo is a winger and for a winger to score as many as 60 goals in 55 appearances in a season is no mean achievement. While with Manchester United, he also had the distinction of being the first ever to win the European Golden Boot award in the 2007-08 season – as a winger.

With Real Madrid, Ronaldo also has the distinct achievement of being the second fastest La Liga player to score 100 goals in just 92 matches. He also became first player to reach 40 goals in a single season in two consecutive years in any of the top European leagues – all these achievements as a winger and not striker. And while Messi has score just 169 goals in 214 appearances for Barcelona as a striker, Ronaldo has score 112 goals in just 101 appearances for Real Madrid, a much faster scoring rate.

Move Messi out of Barcelona

So far, Messi has played for just one club, Barcelona FC, thus proving his ability with one club. On the other hand, Cristiano Ronaldo has proved that he can play in any league across the world - Sporting Lisbon (Portugal), Manchester United (England) and now with Real Madrid (Spain), winning the leagues with Manchester and Real Madrid.

Barcelona FC is no doubt, the best club in the world right now. But as many critics had said then, Barcelona is what Ronaldnho made it; prior his arrival Barcelona was distance away form Real Madrid. This means that Messi is enjoying the outcome of what Barcelona has turned out to be though his contribution cannot be denied either.

Moreover, the support that Xavi Hernandez and Andrea Iniesta, considered the best midfielders in the world, are giving him is nothing like any in the world of football. Hence, many have wondered what would happen to Messi’s football without the support of these two players. Moreover, with Pep Guardiola having left the club, one never know how the Barcelona FC will perform.

So, can we move Messi out of Barcelona FC and see what happens? It would be interesting indeed.

Ronaldo is from Portugal, not Argentina

Messi is lucky to be born in the South American country of Argentina known for their football, while on the other hand Ronaldo is from Portugal, a country not as good and popular as Argentina in football. This means that while Messi has been almost genetically and ethnically gifted with the skills of football, Ronaldo has put himself in a place where he is today through sheer passion and hard working.

Imagine Cristiano was from Brazil. Perhaps, the outcome would have been a different story.

While Messi might have won the Olympics gold in football at the Beijing games in 2008, he has otherwise failed to impress in the national shirt. He failed again to help his country qualify for the London Olympics 2012 despite being the defending champions.

Thus, when it comes to the senior side, Messi has failed to perform for the country – he was goalless at the FIFA World Cup 2010 held in 2010 while Argentina were knocked out by Germany 4-0 in the quarter finals.

On the other, Ronaldo almost single handedly took Portugal to the round of 16 at the FIFA World Cup 2010 and the quarter finals of the Euro Cup 2012.

Thus, when it comes to performance for the nation at the highest level, Cristiano has performed better than Messi.

One might also argue that Ronaldo has just one FIFA Player of the Year award to Messi’s three, but the latter’s award in 2010 did not come without its share of controversy; many players and critics expected Wesley Sneijder of Holland to win it after having led the Orange to the finals of the of the FIFA World Cup 2010, winning the Bronze Boot award for five goals and the Silver Ball for being the 2nd best player of the tournament. He was also heavily instrumental in Inter Milan winning the EUFA Champions League in the same year.

So, at the end of the day, Messi has higher number of awards, both group and individual. But that said again, Messi has been stuck with the same best club of the world. Had he moved out to other team, he might as well win so many awards.

But that said and done, both these players are amazingly talented and the competition between the two will continue for few more years to come.

Thus, at the end of the day, the debate of who is a better player will definitely continue. However, if one has to analyse every angle, situation and the likes, Cristiano takes the edge as the better player between the two.