Coming from the hinterland of Nepal, Anjali Lama never imagined that she would one day walk the ramp at one of India's most reputed fashion shows, where she made history as the first transgender model to take on the catwalk. 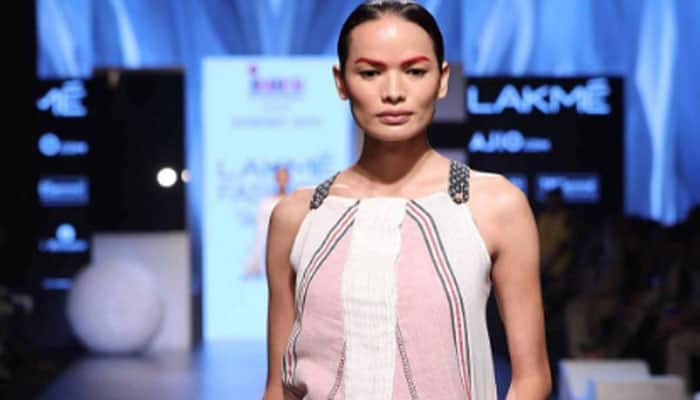 Mumbai: Coming from the hinterland of Nepal, Anjali Lama never imagined that she would one day walk the ramp at one of India's most reputed fashion shows, where she made history as the first transgender model to take on the catwalk.

Anjali was shortlisted through the model auditions for the ongoing Lakme Fashion Week Summer/Resort 2017, which began on Wednesday. She walked the ramp on the first day and is part of the model pool at this year's event.

The fashion event has been keeping Anjali busy till Sunday but earlier in an interview to PTI she said that post LFW, she wants to stay back in Mumbai, hire an agency and kick-start her career here.

"I have planned to settle in Mumbai. This city has given me hope and showered love in the most profuse way possible. I am planning to join an agency to work on dynamics even more professionally and strengthen my portfolio. I dream to win a renowned brand campaign feature while continuing to be walking the runway as this thrills me most," Anjali had said.

The model has already found fans in the audience in just three days of the event with people identifying her.

But Anjali is no stranger to attention. Her life struggle has been presented in a documentary movie called "Anjali: Living Inside Someone Else's Skin" that is based on transsexual lives.

The model has become an inspiration for many back home. Anjali was born in Nuwakot as a boy and was named Nabin Wabia. She changed her gender and became a woman once she moved to Kathmandu for her higher studies.

Anjali's friends realised her modelling potential and asked her think of it as a career option.

"I have always been told by my close friends regarding my good body features and this encouraged me to aspire for modelling as a career."

Her first assignment was of a photoshoot for the cover page of a magazine and the real challenge began after that. Anjali says it was a tough journey as several rejections came her way.

"I was broke but never gave up. The most disturbing thing to hear was the reason of the rejection which was being a 'transgender'. To the point, when my successive failures insisted my well-wishers to also suggest me to leave this career path. I took this as a challenge to debunk this myth and lay my own way forward of my choice which has brought me today to this prestigious runway."

Anjali, however, says that the fashion industry is all encompassing and she never felt discriminated.

"Fashion is conducive. The entire industry has a big global influence in a positive way."