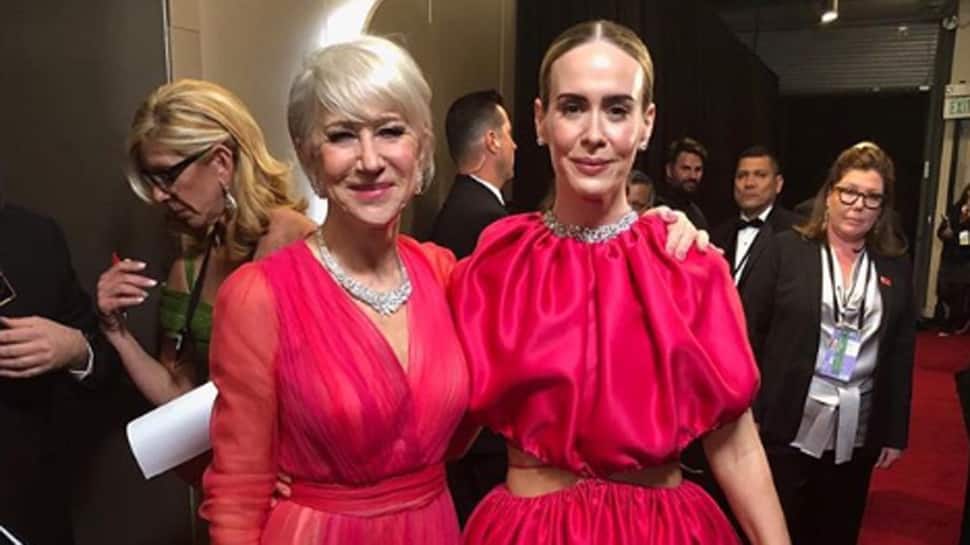 Los Angeles: A year after Oscars traded for an all-black look on the red carpet marking the emergence of #MeToo and Time's Up movements, Academy Awards 2019 painted the town pink with a smatter of metallic shades, pastels and nudes.

"Pose" actor Billy Porter, however, threw the real gender-bender when he appeared in a black velvet Christian Siriano dress and a coordinated bolero jacket.

Helen Mirren, Angela Bassett, Kacey Musgraves, Gemma Chan, Jason Momoa and wife Lisa Bonet, and Sarah Paulson were some of the names who added a pop of colour to the ceremony.

Larson, who walked the red carpet with her "Captain Marvel" co-star Samuel L Jackson, picked for a minimalist look in a high-shine metallic Celine gown with high collar and sexy side slit.

Clarke had the best of both pink and metal as she dazzled in a strapless shimmery metallic Balmain gown in a dusty lilac hue.

Opting for a strong red, Best Supporting Actress nominee Rachel Weisz walked the carpet in a cap-sleeve top and pleated tulle skirt with embellishments and Cartier jewels worn as a headband and a red embellished clutch.

Director Spike Lee gave his tributes to music icon Prince as he turned up in an all-purple suit and custom-made necklace donning the symbol the late singer adopted as his name.

The filmmaker honoured his 1989 cult classic film "Do the Right Thing" by wearing four-fingered LOVE and HATE rings. Lee walked away with the Academy Award for Best Adapted Screenplay for "BlacKkKlasman".

Adams embraced her curves in a strapless white column gown with zigzag pattern throughout and Cartier jewels.

Supermodel Irina Sahyk, who accompanied her fiance actor-director Bradley Cooper to the ceremony, looked chic in a high-neck long-sleeve black gown with gold fringe accents and a deep low back.

Burberry apologises for hoodie with noose