Navratri special 2018- Delicacies to savour during 9-days of fasting

Given below are gourmet delicacies you can savour while fasting. You can, however, probe further and experiment with the flip-flop of ingredients of your predilection. 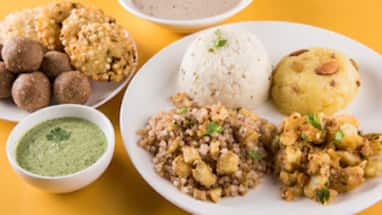 Navratri is the most colourful and celebrated time of the year during which the devotees decorate the idols of Goddess Durga and worship her for a whole 9 days. It is one of the biggest Hindu festivals celebrated with great enthusiasm and piety all over the country. Most of the people fast during this festival to pay their devotion towards the Goddess. We are here to enlighten you with the mouthwatering delicacies prepared in desi ghee for you to embrace the festival and avail oneself of its festivities. Here's a list of Navratri special gourmet dishes which comprises sabudana, sendha namak, kuttu ka atta, singhare ka atta and certain vegetables. All these dishes are delicious along with being light and easy to digest. Furthermore, these ingredients are believed to absorb positive vibes and drive away the evil and malicious energies from you.

Sabudana Khichdi has always been the foremost dish relished by people. Made with tapioca pearls in sendha namak, flavoured with roasted or desi ghee fried peanuts and embellished with coriander, it has plentiful carbohydrates to boost your body for daily chores.

These puris stringed along with aloo bhaji and curd is heartily savoured by the gourmand devotees. Cooked in desi ghee, spreading the aroma to the neighbouring doors, is easy to prepare without a lot of hustle-bustle.

Overloaded with almonds and topped with a dash of saffron (kesar), chilled badaam milk is excessively rejuvenating and filling, which drains away all the fatigue and languor.

Fox nuts (makhanas) are very light and can be used to prepare an enormous variety of dishes, the most famous being the 'makhane ki kheer', albeit the simplest and singled out are the 'roasted makhanas' which can be snacked during any hour of the day.

Lassi (salty or sweet) is extensively consumed and well-liked by people all cross as it soothes and balances the body temperature with Concord to the weather. It is a healthy choice, preferred second to none by the fitness enthusiasts.

Infused with assorted flavours, aloo ki kadhi is light and heavenly, prepared using curd and the multifaceted potatoes, along with tempered dried red chilli in desi ghee, in the end.

The most fancied pakoras can be prepared using fasting ingredients like chestnut flour, potatoes, and sendha namak in desi ghee, which is the best accompaniment with evening tea or as an appetizer.

Ganesh Chaturthi recipe: Here's how you can make delicious Karanji at home!