AFC Asian Cup 2019 India vs Thailand: How the action unfolded

India recorded a 4-1 win against Thailand in their opening clash of the AFC Asian Cup 2019 following a brace by striker Sunil Chhetri who further enjoyed quality support from Jeje Lalpekhlua and Anirudh Thapa. 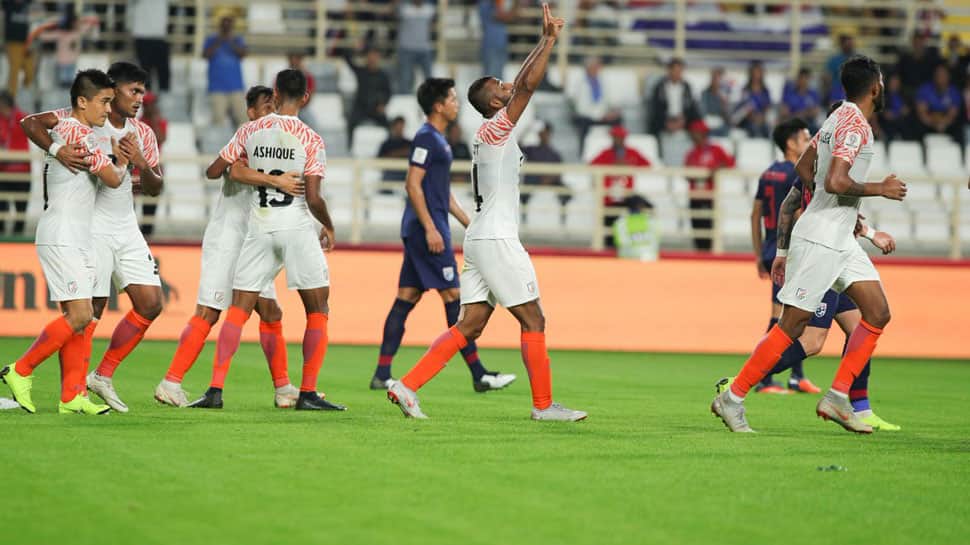 India have recorded a 4-1 win against Thailand in their opening clash of the AFC Asian Cup 2019, on the back of an excellent performance by striker Sunil Chhetri.

Jeje Lalpekhlua and debutant Anirudh Thapa further scored a goal apiece to round off a comprehensive win for India.

# India have taken a 4-1 lead in the game following a long-ranger by substitute Jeje Lalpekhlua, making victory nothing short of a mere formality at this stage for the side. India 4-1 Thailand (82 minutes)

# India have taken a 3-1 lead in the clash following an audacious chip by debutant Anirrudh Thapa who converts effortlessly into the open goal. India 3-1 Thailand (70 minutes)

# Chhetri has been the man to watch out for with a couple of long-rangers as he inches closer to a well-deserved hat-trick. Thailand have struggled to dominate the clash. India 2-1 (67 minutes)

# India have dominated the clash so far in the second half after taking the lead early on following an excellent strike by striker Sunil Chhetri. The Thailand defence is struggling to negotiate the pace and aggressive gameplay. India 2-1 Thailand (58 minutes)

# The clash is all set to resume shortly with the second half set to begin!

Sunil Chhetri scores his 66th with India to overtake Lionel Messi becoming the active player with the 2nd most international goals pic.twitter.com/4EaDP8IeqK

A thrilling first half comes to an end. Predictions for the second?#AsianCup2019 pic.twitter.com/pWKG5EyC3t

# The match is currently tied 1-1 at half time with Thailand equalising following a lead for India after a crucial penalty by Sunil Chhetri. India 1-1 Thailand (Half Time)

# Thailand have converted from a set piece free kick to score the equaliser against India with the goalkeeper Gurpreet Singh in no position to divert the header from Teerasil Dangda away from goal. The game is evenly balanced at this stage with both sides looking to take the lead. India 1-1 Thailand (37 minutes)

# Chhetri converts to make it 66 goals for the marksman on the international stage. India 1-0 Thailand

# Penalty for India following a hand-ball by Thai defender Theerathon which has gifted India a brilliant opportunity to take the lead. Sunil Chhetri steps up to take the kick for India.

# Thailand have attempted to attack down the left flank with goalkeeper Gurpreet Singh under a lot of pressure. India are struggling to negotiate the attacks with a goal nearly conceeded. India 0-0 Thailand (20 minutes)

# Both the sides are off to a positive start in the first few minutes of a clash, with India dominating early on. The passing has been accurate with the Indian attack looking to take advantage of any possible opportunities. India 0-0 Thailand (10 minutes)

# Optimistic predictions from the Indian fans!

# Here are the lineups from both the sides!

# Can India start with a win against Thailand?

Coming on the back of some impressive results in the recent months, the Indian men's football team will look to take inspiration from the same when the 97th-ranked side begin their AFC Asian Cup 2019 campaign against 118th-placed Bahrain at the Al Nahyan Stadium in Abu Dhabi on Sunday.

The AFC's continental showpiece event, which began on Saturday and will run till February 1, is featuring a total of 24 teams divided into six groups of four sides each.

India, who have been drawn alongside hosts UAE, Bahrain and Thailand in Group A, are making their fourth appearance at the AFC Asian Cup. They ended as runner-ups in 1964 while they finished last in the group stage in 1984 and 2011.

If India manage to beat Thailand, then a draw in the remaining two group matches could be enough for them to make it to the knock-out round.