The Bundesliga side, who played with 10 men for almost an hour, were in danger of being blown away when Benfica went 4-1 up just after halftime but a second goal by substitute Goncalo Paciencia left the tie more finely balanced for the return. 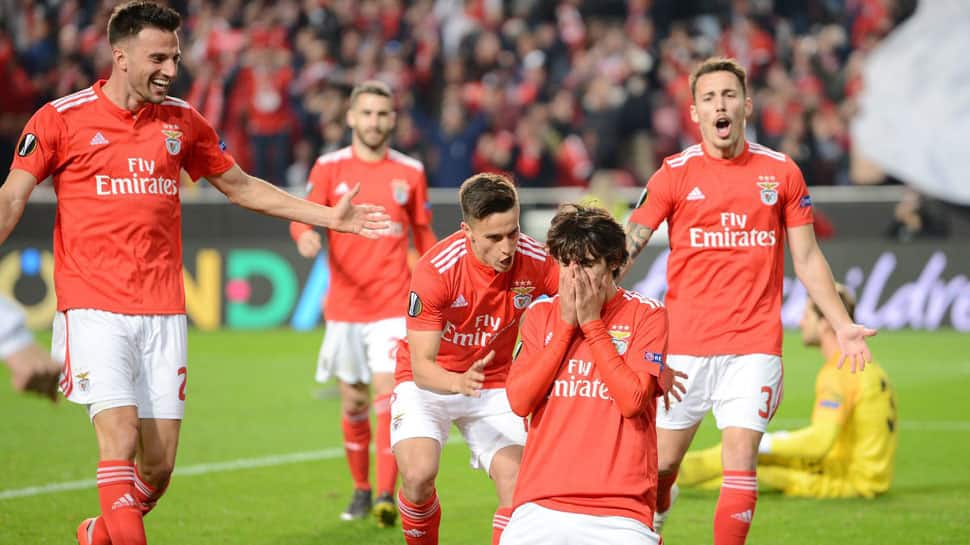 Benfica`s 19-year-old forward Joao Felix became the youngest player to score a Europa League hat-trick as he led them to a 4-2 win over 10-man Eintracht Frankfurt in their quarter-final first leg on Thursday.

The Bundesliga side, who played with 10 men for almost an hour, were in danger of being blown away when Benfica went 4-1 up just after halftime but a second goal by substitute Goncalo Paciencia left the tie more finely balanced for the return.

Benfica coach Bruno Lage warned against getting carried away with the performance of Joao Fenix, who only made his first-team debut this season.

"If he hadn`t scored tonight, everyone would have said he is off-form, but because he scored three, they say he is flying," said Lage.

Eintracht forward Luka Jovic, on loan from Benfica, missed two early chances as the Bundesliga side made a bright start before the game took a dramatic twist.

Joao Felix threaded a ball through the Eintracht defence to send Gedson Fernandes clear and he was pushed over from behind by Evan N`Dicka.

The referee judged that Fernandes had been denied a clear scoring chance, N`Dicka was sent off and Joao Felix calmly converted the penalty in the 21st minute.

Jovic equalised against his parent club in the 40th minute after Benfica were caught in possession but Joao Felix put the hosts back in front three minutes later with a low strike from 20 metres which caught keeper Kevin Trapp off guard.

Ruben Dias headed a third for Benfica after a corner was knocked on in the 50th minute and Joao Felix sidefooted the fourth four minutes later as the Eagles threatened to run riot.

Eintracht were not finished, however, and substitute Paciencia, raised at Benfica`s arch-rivals Porto, put them back in the tie with a looping header from a corner in the 72nd.

"It feels like every shot they had went in despite me getting something on most of them," said Trapp. "It’s not a great feeling for a keeper because you’re the one that has the responsibility to come to your team’s rescue."

"We could have let our heads drop at 4-1, but we persevered and hopefully a 4-2 loss will be enough come the end of the second leg."