Two stunning first-half goals, a solo effort from Christian Pulisic and a free kick from Paco Alcacer, gave Dortmund a 2-0 lead and put them in complete control before they self-destructed after halftime. 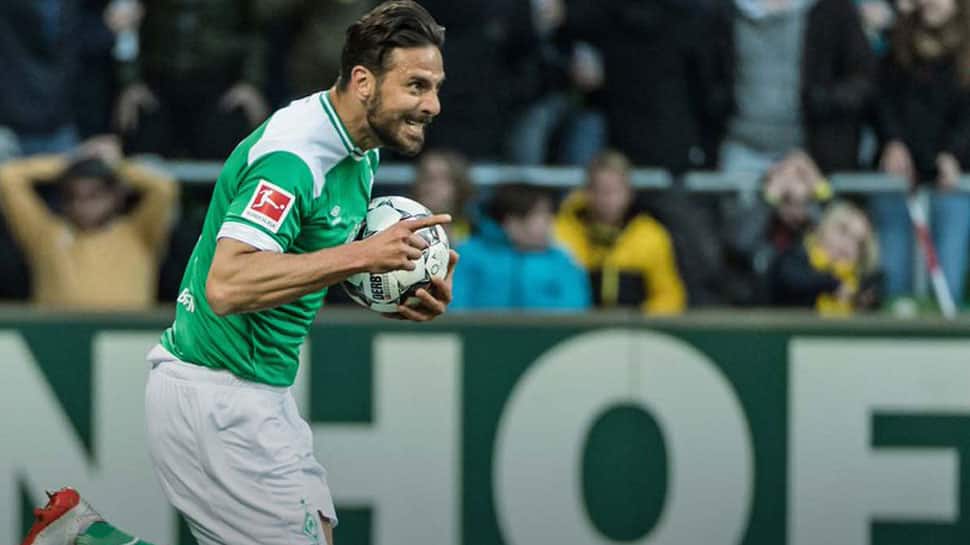 Two stunning first-half goals, a solo effort from Christian Pulisic and a free kick from Paco Alcacer, gave Dortmund a 2-0 lead and put them in complete control before they self-destructed after halftime.

Kevin Moehwald pulled one back with a shot which slipped through goalkeeper Roman Buerki`s legs in the 70th minute and Peruvian veteran Pizarro rifled home the equaliser as Werder capitalised on a defensive mix-up five minutes later.

Dortmund dropped four points behind Bundesliga leaders Bayern Munich with two matches each to play, meaning that the Bavarians, who have 74 points from 32 matches, can wrap a seventh successive title by winning at RB Leipzig next Saturday.

"We had the chances to make it 3-0, three clear chances in the second half, and we have to stay calm when that happens," said Dortmund coach Lucien Favre. "Of course, we gave away two unnecessary goals, that is clear."

The visitors got off to a flying start as Pulisic collected the ball near the halfway line, nutmegged an opponent, ran through the middle of the Werder defence and slipped the ball between Jiri Pavlenka and his near post in the sixth minute.

The 20-year-old American, who has had a mixed season, was standing in for suspended captain Marco Reus.

Both teams created openings in an intriguing first half but another moment of inspiration, this time from Alcacer, put Dortmund 2-0 ahead.

The Spaniard sent a dipping shot over the wall and into the bottom corner from 25 metres as he scored his 18th goal of the season and the third from a free kick.

Pulisic had a shot blocked and Goetze saw another effort saved by Pavlenka as Dortmund threatened to grab a third before halftime.

The Czech goalkeeper kept Werder in the game with further saves from Thomas Delaney and Alcacer in the second half before the game took a dramatic twist with Buerki`s mistake, the Swiss allowing Moehwald`s 20-metres shot to squirm through his legs.

"Roman has had a great season, he has rescued a lot of points for us," said Favre.

Five minutes later, Ludwig Augustinsson took advantage of hesitation between Manuel Akanji and Buerki and pulled the ball it back for Pizarro to score his fourth goal of his 19th Bundesliga season.

Dortmund then escaped a penalty when the ball hit Mario Goetze`s arm but the referee gave a throw-in after reviewing the incident on the pitchside monitor.

"It is always special for me to play," said Pizarro. "We just lacked a bit to get that third goal but we did well to get a draw."