Goals by Timo Werner and Mason Mount sent Chelsea into a Champions League final showdown with Manchester City as they outclassed Real Madrid to win 2-0 for a 3-1 aggregate triumph at Stamford Bridge on Wednesday. 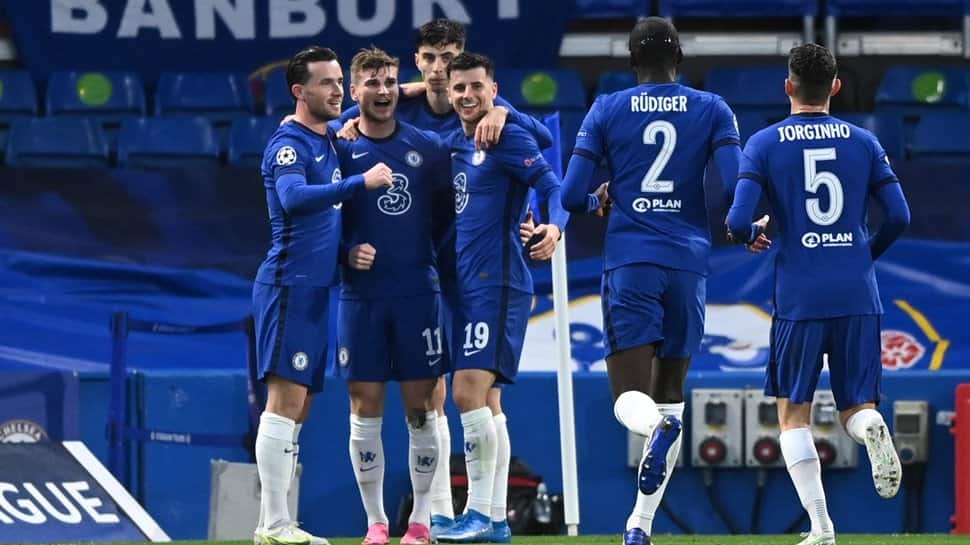 LONDON: Goals by Timo Werner and Mason Mount sent Chelsea into a Champions League final showdown with Manchester City as they outclassed Real Madrid to win 2-0 for a 3-1 aggregate triumph at Stamford Bridge on Wednesday.

German striker Werner, who has endured a stuttering first season at Chelsea, put them in control when he nodded in one of the easiest goals of his career in the 28th minute after fellow German Kai Havertz had struck the bar.

Thirteen-times European champions Real, who had come through each of their last three Champions League semi-final ties, had been second best for much last week`s first leg which ended 1-1.

Even with talisman Sergio Ramos back after missing the home leg they were outplayed by Thomas Tuchel`s side again as the German continued his stunning impact in west London to become the first coach to reach back to back Champions League finals with different clubs.

Chelsea should have killed the game as they created, and wasted, a sackload of chances in a dazzling second-half display. But Mount got the party started in earnest when he converted from close range in the 86th minute to become the second-youngest English player to score in a Champions League semi-final after Wayne Rooney.

The final in Istanbul will be the second all-English champions League final in three seasons and gives Tuchel, who has transformed Chelsea since replacing Frank Lampard in January, the chance to make up for last season when his Paris St Germain side lost to Bayern Munich.

"We deserved to win. The first half was difficult, they had a lot of possession and made us suffer," Tuchel said.

"In the second half we could have scored so much earlier, so much more to be safe, but now is no time for criticism. It is a fantastic achievement and big congratulations to the team. It is not done yet, we want to go all the way, we arrive in Istanbul to win."

Real made a confident enough start in their famous white shirts on a night that felt more like January than May with a hailstorm erupting shortly before kickoff.

Home keeper Edouard Mendy made a couple of routine early saves from Toni Kroos and Luka Modric but it was Chelsea whose work was more incisive. Mason Mount, Havertz and Werner looked a real handful for Real`s lumbering defence while N`Golo Kante, outstanding last week, again pulled the strings for Chelsea in midfield.

The hosts should have taken the lead when Werner tapped in Ben Chilwell`s low cross but the German had strayed offside.

Within the space of a pivotal minute, Chelsea seized control as first Mendy produced a stunning one-handed save in the 27th minute to prevent Karim Benzema`s curling shot creeping inside the post. Then, at the other end, Kante advanced and played a one-two with Werner before sliding a pass to Havertz who casually dinked a lob over Thibaut Courtois.

Time seemed to freeze as the ball floated down and bounced off the crossbar, leaving Werner to nod in to an empty net -- his first Champions League goal in open play since September 2019.
Real needed a quick response and almost got one with Benzema`s header pushed over by a flying Mendy.

Chelsea might have expected a second-half onslaught from Zinedine Zidane`s side. Instead they turned the screw.

Havertz, given the nod over Christian Pulisic, headed against the crossbar then Mount blazed a glorious chance over after a flick by Werner left him with only Courtois to beat.

When Havertz went through on goal shortly afterwards but shot straight at Courtois, Tuchel was apoplectic, turning the air blue at Chelsea`s failure to kill off the Spanish side.

Chelsea could finally relax when Kante drove forward yet again and picked out Pulisic who bided his time before sliding the ball across for Mount to score.

"We should have had about five, but the most important thing is that we won," Mount said.

Premier League: PL might allow fans inside stadiums from May 17