Betis striker Loren Moron headed Betis in front at the end of the first half and Joaquin doubled their advantage in bizarre circumstances early in the second. 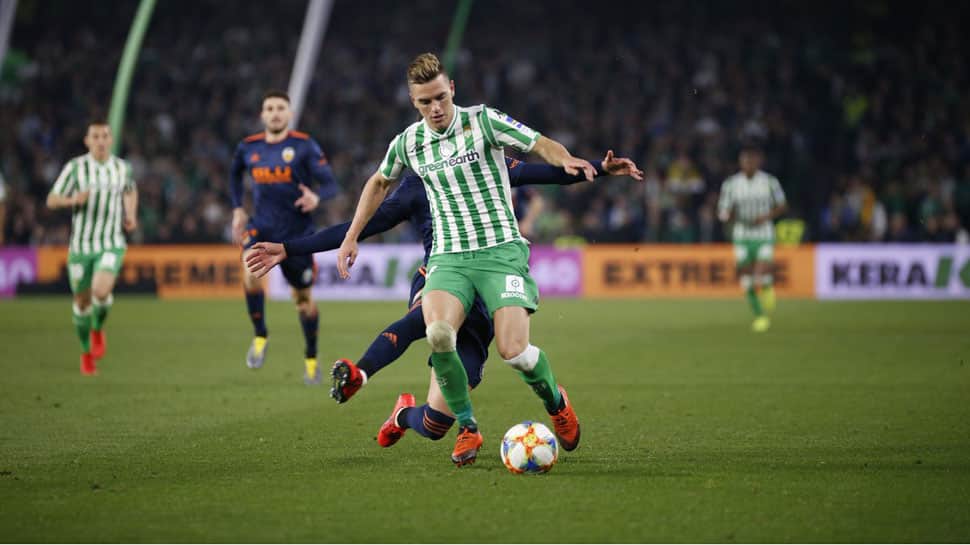 Real Betis captain Joaquin scored a remarkable goal straight from a corner in his side`s Copa del Rey semi-final first leg at home to Valencia on Thursday, but the visitors fought back from two goals down to snatch a 2-2 draw.

Kevin Gameiro grabbed a stoppage-time equaliser for Valencia after Denis Cheryshev had reduced the deficit with 20 minutes remaining, leaving the tie in the balance heading into the second leg at the Mestalla stadium on Feb. 28.

Betis striker Loren Moron headed Betis in front at the end of the first half and Joaquin doubled their advantage in bizarre circumstances early in the second.

The veteran midfielder whipped in a corner which crossed the line before Valencia`s goalkeeper Jaume Domenech could pat it away, with the referee awarding the goal after consulting the Video Assistant Referee (VAR).

Betis, who last lifted the trophy in 2005, looked to be in pole position to reach the final in May, which will be played at their stadium, but Russia forward Cheryshev punctured the party atmosphere with a glanced header.

Cheryshev almost levelled in the closing stages with a second header but instead struck the crossbar, but French striker Gameiro completed the comeback with a strike in added time.

The fightback gives Valencia a huge psychological edge heading into the second leg, knowing that a goalless or a 1-1 draw will be enough for them to reach the final.

"We wanted to win but two mistakes from set pieces cost us two goals, but it was vital that we got the goals and the draw," said Cheryshev.

"We have to correct a few things, but we are in good shape. In Mestalla we`ll have to go and take the game to them, win it and get to the final."

Betis striker Loren could not hide his disappointment after his team threw away the lead.

"We can`t be happy, we should have closed the game out. It is very tough for us but we`ve still got the second leg and we`ll try to reach the final.

"We went in at halftime feeling great and then started the second half in the best way possible with Joaquin`s goal, so we leave here feeling very sad."

Barcelona drew 1-1 at home to Real Madrid in the first leg of the other semi-final tie on Wednesday.