The midfielder netted in the second and fifth minute of injury time at the end of the second half to secure a valuable point for the Blue Colts, who were trailing 1-3 at the 90-minute mark. 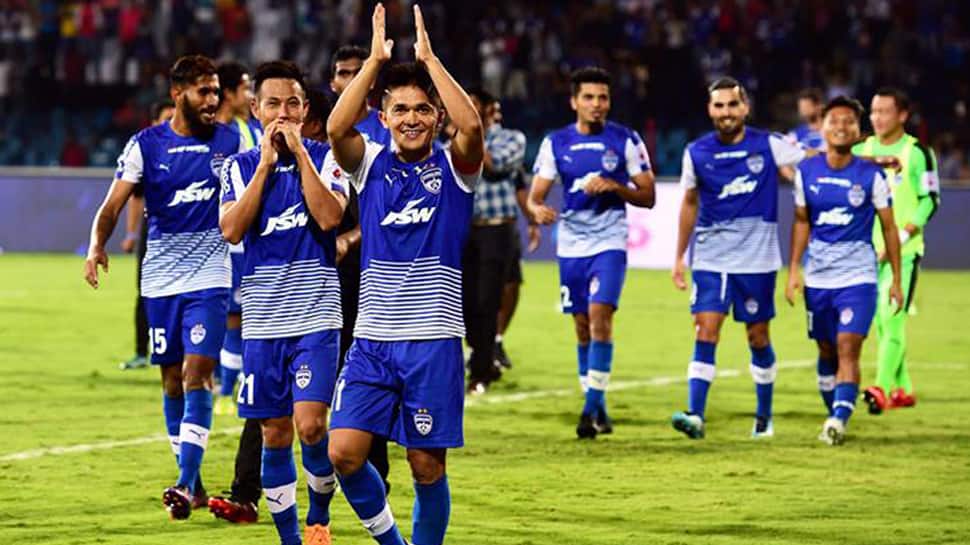 Suresh Singh Wangjam converted two penalties right at the death to secure a dramatic 3-3 draw for Bengaluru FC against Jamshedpur FC in their final group game of the Durand Cup at the Vivekananda Yuba Bharati Krirangan on Saturday.

The midfielder netted in the second and fifth minute of injury time at the end of the second half to secure a valuable point for the Blue Colts, who were trailing 1-3 at the 90-minute mark.

Earlier, Vimal Kumhar (2') had given Jamshedpur FC the lead before Leon Augustine (45') levelled the score at the stroke of half-time. Aakash Dave (51') and Nabin Rana (80') struck for Jamshedpur FC in the second half before Suresh (90+2', 90+5') netted twice from the spot.

Going into the game looking for their first win, Bengaluru FC coach Naushad Moosa opted to make two changes as he handed starts to goalkeeper Dipesh Chauhan and midfielder Emanuel Lalchhanchhuaha in place of Aditya Patra and Ajay Chhetri, respectively.

However, the Blue Colts were pegged back right at the start as they conceded inside two minutes from kick-off. Jamshedpur attacker Pukhrambam Manisana did well to make space in the box on the left before sliding a low ball to Vimal Kumhar at the far post and the striker made no mistake, tapping home from close.

Stung by the early goal, Bengaluru gathered their composure and began pushing ahead. They dominated the proceedings almost completely thereafter, creating multiple chances, but Moosa's boys were unlucky to have not scored.

The woodwork denied Bengaluru on three occasions in a fifteen-minute spell. First, it was Emanuel whose attempt from the distance after some good play by Namgyal Bhutia and Naorem Roshan Singh came off the crossbar in the 15th minute.

Seven minutes later it was Edmund Lalrindika who was denied after Biswa Darjee did well to get into the box on the right before cutting it back to the striker whose first-time attempt came off the crossbar.

In the 29th minute, it was skipper Roshan whose powerful left-footer came off the horizontal after his effort on a breakaway move came off a defender.

The Blue Colts finally equalised on the stroke of half-time when Leon got one past Jamshedpur custodian Amrit Gope. Suresh Singh Wangjam played a short corner to Parag Shrivas on the left and the defender floated in a good cross into the box to find Sairuat Kima who headed the ball down to Leon and the winger sent it home on the slide.

Jamshedpur took the lead once again early into the second half when Aakash Dave's attempt on a counter attack was deflected past Dipesh in the Bengaluru goal.

While the Blue Colts kept pushing ahead in search of an equaliser, another defensive lapse allowed Jamshedpur to further increase their lead, as Nabin Rana netted from Pukhrambam's set up.

While it looked like the game would end 3-1 in favour of the Jharkhand-based side, Moosa's boys struck twice in injury time to snatch a point. First, Leon was brought down by rival skipper Billu Teli and Suresh stepped up to score from the spot in what was his second successful penalty conversion in the competition.

Minutes later, Leon was once again impeded in the box, this time by goalkeeper Gope and Suresh stepped up once again to complete his brace, taking his tally to three goals in the campaign, all from the spot.