The Fortunegiants have a huge task at hand if they have to prevent their formidable rivals from making it three-in-a-row. 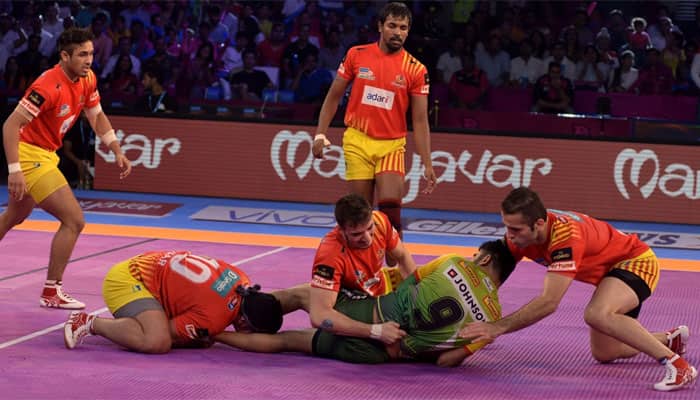 Chennai: Debutant Gujarat FortuneGiants will hope to cap a memorable run in the Vivo Pro Kabaddi League Season Five with a triumph when it takes on two-time defending champion Patna Pirates in the final at the Jawaharlal Nehru Indoor Stadium here on Saturday.

The Gujarat franchise outclassed Bengal Warriors 42-17 in Qualifier 1 to book a spot in the final while the Pirates rode on Pardeep Narwal's brilliance to fight its way into the summit clash.

Narwal starred in the team's 47-44 win over Bengal Warriors in Qualifier 2 here yesterday.

He has been in tremendous form for the Pirates and would definitely hold the key tomorrow.

Pirates captain Narwal said ahead of the final, "We started this season with only one goal in mind, to complete a hat-trick of titles for Patna Pirates."

"The journey has been great so far and I appreciate the effort put in by each and every member of the team, day in and day out. It's been a long and a fulfilling season for us with a lot of positives."

The Fortunegiants have a huge task at hand if they have to prevent their formidable rivals from making it three-in-a-row.

However, the team's captain Fazel Atrachali was upbeat ahead of the finale and said, "We have played as one, where everyone had amazing synergy with each other and successfully overcame the language barrier."

"We'll use the same strategy in the finals, with our eyes on the prize!"

The coach Manpreet Singh said, "A strong strategy is key to success in any sport. And that is a mantra that each team member of the Gujarat FortuneGiants follows. It a matter of pride that the team has reached the finals in our first year in the league."

Led by the dynamic Fazel Atrachali, the players have displayed great teamwork and strong sportsmanship. We have to now focus on winning the final."

The Pirates coach Ram Mehar Singh said Narwal had been the key player for the team, which had now set its sight on another title.

"Belief is all we started this season of Pro Kabaddi League with. With back to back wins in Season 3 and 4, the pressure on us to perform was immense. I really appreciate the way this young team has come through in such a high-intensity environment and performed to their fullest."

Pardeep has been a revelation in the way he has led from the front with phenomenal performances throughout the season.

"Our eyes are firmly set on the title now and nothing less than a victory will satisfy the Pirates now," he said.

The final will get underway at 8 PM.