Ward-Prowse`s stunning free-kick winner left Spurs third on 61 points, still 10 behind leaders Manchester City, who were hosting Watford later on Saturday, and nine behind Liverpool, who entertain Burnley on Sunday. 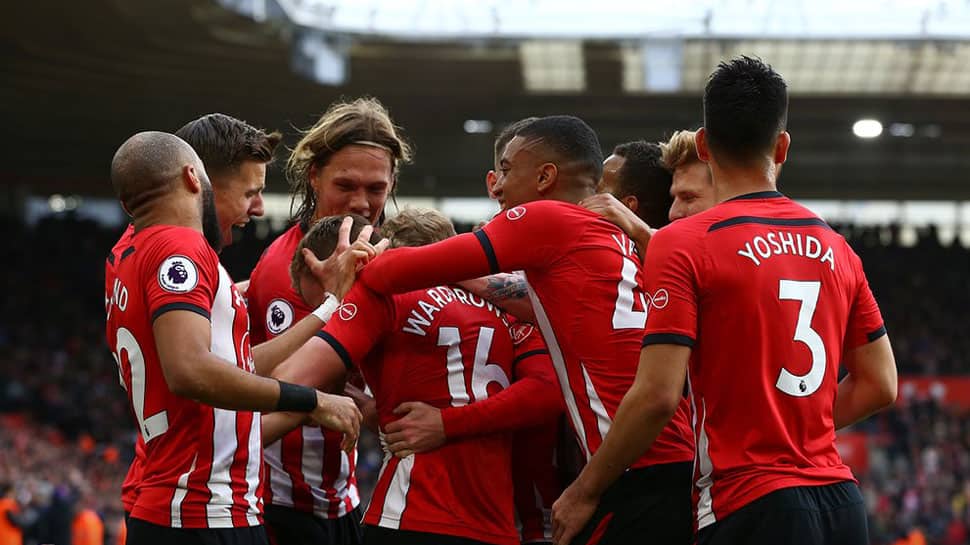 England captain Harry Kane scored the 200th goal of his career but his milestone was eclipsed as Tottenham Hotspur squandered a lead in a game they were dominating before suffering a 2-1 Premier League defeat at Southampton on Saturday.

On a day when Jamie Vardy scored his 100th goal for Leicester City in their 3-1 home win over Fulham, Kane enjoyed his own landmark moment at St Mary`s -- his 200th in all matches for clubs and country -- to put Spurs ahead.

Yet it was to prove an unhappy return to his old St Mary`s stamping ground for Spurs manager Mauricio Pochettino who, serving the first of a two-match touchline ban, saw his side capitulate to two late goals in five minutes from Yan Valery and James Ward-Prowse.

Ward-Prowse`s stunning free-kick winner left Spurs third on 61 points, still 10 behind leaders Manchester City, who were hosting Watford later on Saturday, and nine behind Liverpool, who entertain Burnley on Sunday.

The win also dented Spurs`s hopes in an ever-tighter top-four battle for Champions League places as they remain just three points ahead of their nearest pursuers Manchester United, who play at fifth-placed Arsenal on Sunday.

Southampton`s late turnaround, though, earned them crucial points in the fight to avoid relegation, just as Cardiff City were able to celebrate an equally important 2-0 win over West Ham United thanks to goals from Junior Hoilett and Victor Camarasa.

Cardiff`s win was not enough to take the 18th-placed side out of the bottom three but they are just two points behind Burnley and Southampton (30 points) while Brighton joined Palace on 33.

Newcastle United pushed clear of the struggling pack into 13th place with an astonishing comeback from two down at halftime to beat Everton 3-2, with a goal from Salomon Rondon and a late double from Ayoze Perez, that earned them a fifth straight league win at St James` Park.

There seems, however, no hope now for Fulham, under their caretaker manager Scott Parker, after their defeat at Leicester, whose own new boss Brendan Rodgers was grateful for Vardy`s late double.

The brace ensured the England striker became the first player to achieve a three-figure tally of goals for the Foxes since Gary Lineker.

Fulham are in 19th place on 17 points with their plight only topped by Huddersfield Town`s after the Terriers remained three points further adrift following their 2-0 home defeat by Bournemouth.