Jurgen Klopp`s side move to 73 points, one behind City, who beat Watford 3-1 on Saturday. Both teams have eight games remaining. 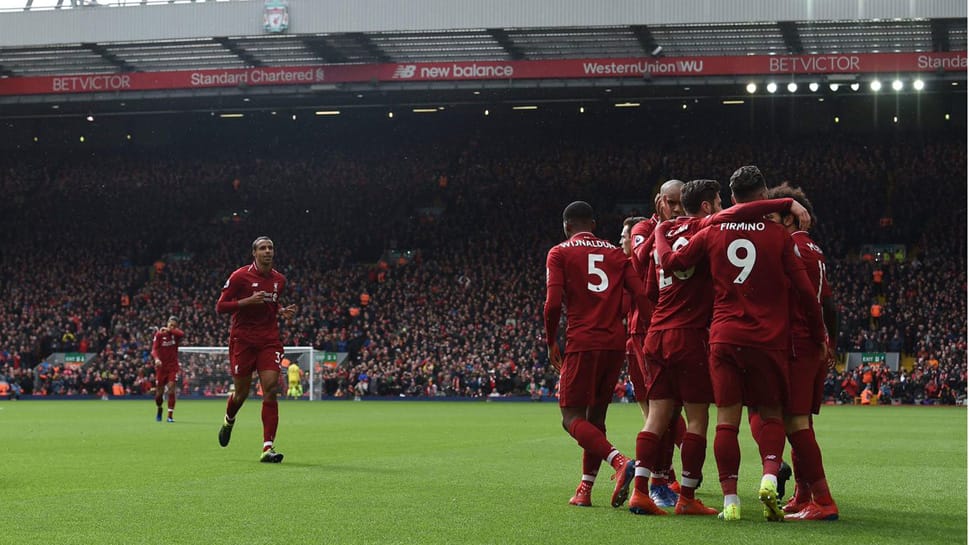 Two goals each for Roberto Firmino and Sadio Mane helped Liverpool to keep in touch with Premier League leaders Manchester City with a 4-2 win over lowly Burnley at Anfield on Sunday.

Jurgen Klopp`s side move to 73 points, one behind City, who beat Watford 3-1 on Saturday. Both teams have eight games remaining.

Liverpool came through this tricky fixture, played in high wind and sporadic showers, helped by some generous gifts from the Burnley defense and while they were not at their very best Klopp was still pleased.

"Good game, difficult but good. It is always difficult against Burnley. In the circumstances, even more difficult. 4-2 is a brilliant result," he said.

The German chose to recall Adam Lallana to his midfield, at the expense of Jordan Henderson, and the former Southampton midfielder, whose career has been hampered by injury, delivered a fine showing.

"I told him, if he can play like he trained, then he will help us a lot and that is exactly how it happened," said Klopp.

It was the visitors though, who took a surprise lead in the sixth minute, with Ashley Westwood scoring directly from a corner although Burnley`s James Tarkowski looked to have impeded Liverpool keeper Alisson Becker.

If Burnley`s strategy was to frustrate their opponents and create some nervous tension in the stadium it was working well but they were undone by unusually sloppy work at the back.

Tarkowski and Clarets keeper Tom Heaton got in each other`s way as they made a mess of a low cross from Mohamed Salah and Firmino was left with the simplest of tap-ins to equalise.

The tension having eased, Mane then put Liverpool ahead with a fine, curling finish after a poor clearance from Jeff Hendrick was blocked by Lallana.

Burnley started the second half well but the outcome was put beyond doubt in the 67th minute when Heaton poorly kicked straight to Salah, the Egyptian bursting into the area, and Charlie Taylor`s sliding tackle fell kindly to Firmino who made no mistake.

Substitute Johann Berg Gudmundsson pulled back a goal in stoppage time for 17th-placed Burnley who remain two points above the relegation zone.

For a moment, with winger Dwight McNeil causing problems on Liverpool`s right with his dribbling and crosses, Burnley threatened an improbable comeback.

But after another easy giveaway, Mane added a fourth goal to make sure of the three points, rounding Heaton and slotting into the empty net.

While Klopp can turn his attention to Wednesday`s Champions League second-leg match away to Bayern Munich, Burnley manager Sean Dyche has eight games to keep his team in the top flight.

The Burnley boss was pleased with his team`s mentality but said they had paid the price for their defensive errors.

"You cannot give a team like Liverpool four goals -- we certainly gave them three. You can question the errors but we certainly made a game of it," he said.