Liverpool moved to the summit on 91 points, two more than City, but Pep Guardiola`s side will regain top spot with a win at Burnley on Sunday. 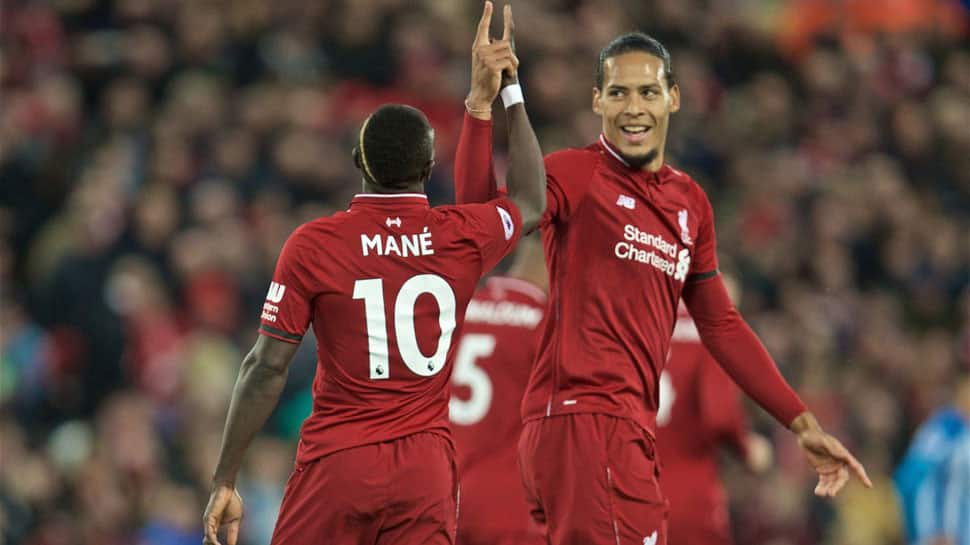 Sadio Mane and Mohamed Salah both struck twice as Liverpool kept the pressure up on Premier League title rivals Manchester City with a predictable 5-0 thrashing of relegated Huddersfield Town on Friday.

Liverpool moved to the summit on 91 points, two more than City, but Pep Guardiola`s side will regain top spot with a win at Burnley on Sunday.

It was Liverpool`s seventh league win in a row and with a trip to Newcastle United and home game with Wolverhampton Wanderers the two remaining games in the season, Jurgen Klopp`s side could well keep that streak going until the end.

Liverpool could end the campaign with just a solitary league defeat to go with several other records -- but none of that will count for much if Pep Guardiola`s side does not drop points in their three remaining matches.

"We are happy with the points we have and now we are focussed on the next game. We have a mindset that works and we try to create problems for each opponent by working hard," Klopp said.

"It`s obviously an outstanding group of players, who did well against a Huddersfield side who are much better than the result shows. They had proper counter-attacks so we needed to be patient and we scored wonderful goals," he said.

Liverpool, who face Barcelona in the first leg of their Champions League semi-final on Wednesday, were without forward Roberto Firmino who was rested due to a slight muscle strain.

But Klopp`s side do not lack for firepower even without their Brazilian striker.

It took 14 seconds for Liverpool to go in front with Huddersfield defender Jon Gorenc Stankovic giving the ball away to Salah just outside the box and the Egyptian fed Naby Keita who slotted home off the inside of the post.

Mane headed in the second in the 23rd minute, meeting a trademark Andy Robertson cross from the left after Virgil Van Dijk had started the move with a surge out from the back.

On the stroke of halftime, Salah put the game beyond Huddersfield when he latched on to a long pass forward from Trent Alexander-Arnold and knocked the ball past the advancing Jonas Lossl.

Huddersfield, who tried to be positive, started the second half in determined fashion, creating three promising openings, but Liverpool soon took back control.

Mane scored his second and Liverpool`s fourth in the 66th minute, heading in a deep cross from Jordan Henderson and he went close to a hat-trick in the 78th minute when he headed a Xherdan Shaqiri cross against the post.

Salah made it 5-0 with a simple close-range tap-in from a low Robertson cross. Alex Oxlade-Chamberlain returned to action as a substitute, his first appearance since suffering a knee injury a year ago.