Brazil international Willian struck with a delightful side-footed volley from distance seven minutes from time to double his tally after converting a first-half penalty. 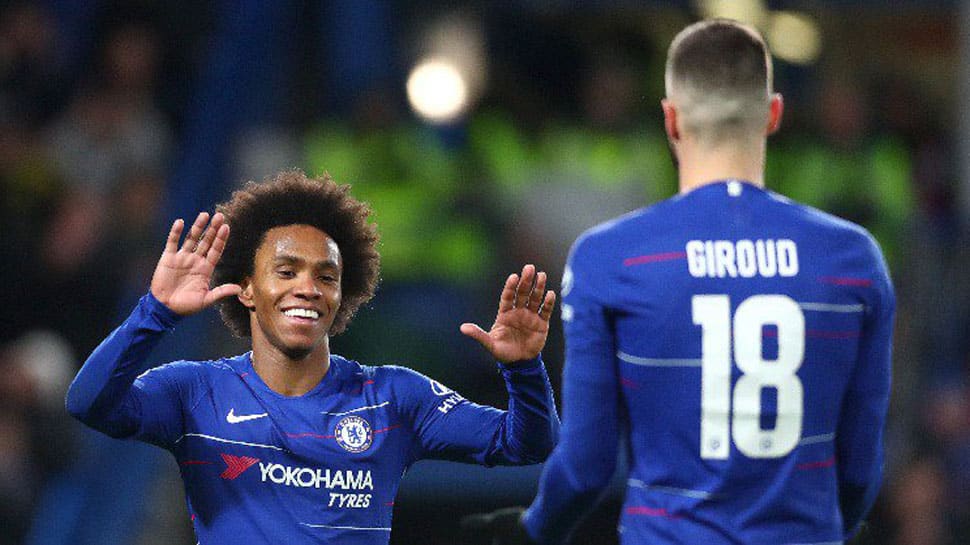 Chelsea`s Willian struck twice and Callum Hudson-Odoi was also on target as the FA Cup holders enjoyed a 3-0 win over Sheffield Wednesday to reach the fifth round on Sunday with new signing Gonzalo Higuain making his debut.

Brazil international Willian struck with a delightful side-footed volley from distance seven minutes from time to double his tally after converting a first-half penalty.

Hudson-Odoi, a reported transfer target of German giants Bayern Munich, had earlier collected a long pass from the left and cut in beautifully to slot home in the second half.

"I thought we did well," Hudson-Odoi told the BBC. "It was a great team performance. We did very well in training and worked really hard. That`s one of my highlights. It was nice to top it off with a goal."

Asked if it was his last game for Chelsea, with the transfer window closing on Thursday, the 18-year-old added: "I don`t know, I can`t say. I`ll keep working hard and you never know what will happen."

Sheffield Wednesday had been awarded a penalty in the 22nd minute after Chelsea midfielder Ethan Ampadu appeared to bring down the advancing Joey Pelupessy, only for the video assistant referee (VAR) to overturn the original decision.

The referee pointed to the spot at the other end two minutes later as Chelsea skipper Cesar Azpilicueta was taken out by Sam Hutchinson, with VAR confirming that the defender was fouled.

After a chat with Higuain, who joined Chelsea on loan from Juventus this week, Willian sent Wednesday`s Keiren Westwood the wrong way to give Chelsea the lead after 26 minutes andadded his second goal late on after Hudson-Odoi scored in the 64th.

The 31-year-old Higuain looked sharp with some intelligent runs before coming off for Olivier Giroud with 10 minutes to go.

"We`re pleased with Higuain`s performance, he was trying to find the space and get on the ball. It wasn`t easy as they had a lot of players around him," Chelsea assistant manager Gianfranco Zola said of the Argentina striker`s contribution.

"It`s a good result, we`re very happy. We know how difficult these cup ties can be. Everyone made a really good effort."