An early own goal by Luke Shaw, who deflected in a header from Luis Suarez, decided a tight first leg and gave Barca their first victory at Old Trafford in five attempts in the European competition. 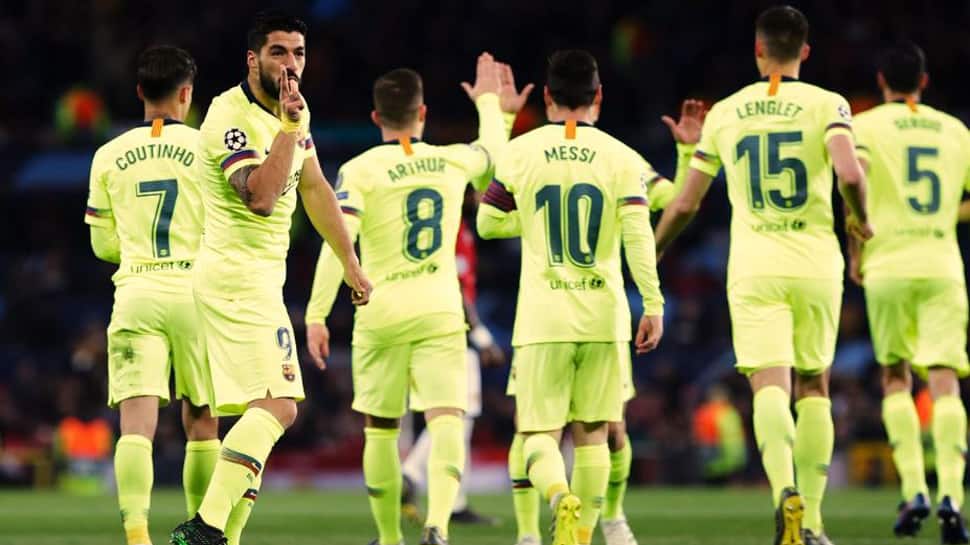 Barcelona defender Gerard Pique praised his side for shutting out Manchester United in Wednesday`s 1-0 win at Old Trafford as the Catalans seized the advantage in their Champions League quarter-final tie.

An early own goal by Luke Shaw, who deflected in a header from Luis Suarez, decided a tight first leg and gave Barca their first victory at Old Trafford in five attempts in the European competition.

"We put in an excellent performance defensively, we`re in our best form in defense of the season. The early goal relaxed us and we knew how to cope with the situation, the fact we didn`t concede helps us a lot," Pique told reporters.

"It`s very difficult to come here, it`s a historical ground, there`s a sensational atmosphere and you get put under a lot of pressure."

The only goal of the game came from a clever cross by Lionel Messi although Barca`s captain was kept unusually quiet for the remainder, after being left with a bloodied face from a clash with United`s Chris Smalling.

"Messi felt very uncomfortable after the blow to the head, we`ll have to examine him tomorrow to see how he is, it was a strong blow, he has a large bruise," said Barca coach Ernesto Valverde.

Midfielder Sergio Busquets added: "It was a big blow, he has a scar and he bled a lot, it was obviously uncomfortable for him but he put on a brave face and played as best as he could, as he always does."

United had far more attempts than the runaway La Liga leaders but they could not muster a single shot on target, and visiting goalkeeper Marc-Andre ter Stegen was never tested.

"We leave here with a good sensation but we know they will give everything away from home," added Valverde.

Barca have failed to reach the Champions League semi-finals since 2015 yet the win at Old Trafford sets them up well for next Tuesday`s second leg at the Nou Camp, where they are unbeaten in their last 30 matches in Europe`s elite competition.

Pique, however, said Ole Gunnar Solskjaer`s side could not be written off after their remarkable turnaround against Paris St Germain in the last-16, in which they overturned a 2-0 first-leg deficit by winning 3-1 in the French capital.

"After seeing what they did against PSG there`s no reason at all to believe the tie is over," Pique said.

"PSG were the clear favourites then, they played far better and look what happened. Anything can happen in football so we`ll have to focus very hard."