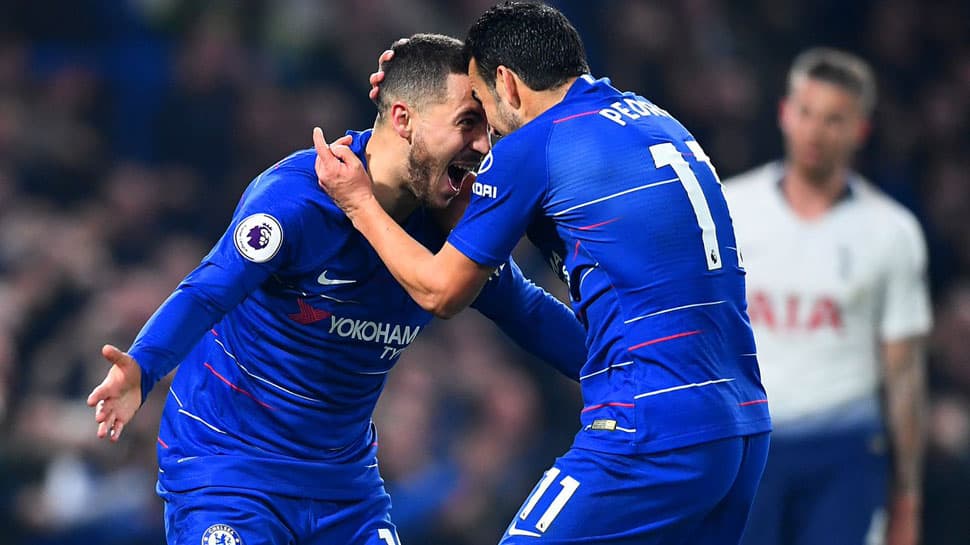 Chelsea put a tumultuous few days behind them and a smile back on manager Maurizio Sarri's face, as they revived their top-four hopes with a 2-0 victory over stuttering Tottenham Hotspur at Stamford Bridge on Wednesday.

Sarri has been under immense pressure of late, after his side's poor form and it seemed like he was losing control at Wembley on Sunday, when goalkeeper Kepa Arrizabalaga refused to be substituted at the end of extra time against Manchester City.

Arrizabalaga was dropped by Sarri for the visit of third-placed Tottenham with Willy Caballero taking his place, a move that could have backfired on the Italian.

As it turned out, Caballero did not have much to do and it was Tottenham keeper Hugo Lloris who became the fall guy.

First, he was beaten from a tight angle by Pedro in the 57th minute and then he was jointly culpable in a comical own goal by Kieran Trippier late on.

From being talked about as title contenders a few days ago, Tottenham have lost two league games in a row and now have the pack closing in below them in the battle for a top-four finish.

Tottenham are four ahead of Arsenal who they host on Saturday and five in front of Manchester United.

Arrizabalaga's antics had overshadowed what was an impressive display by Chelsea against Manchester City, when they were beaten in a penalty shoot-out.

Sarri said dropping him was a "message to the group" and it clearly hit home as Chelsea's players put in a shift.

"I was sure my relationship with my players is really very good and in the last month better," he added.

Chelsea began at a high-tempo and Gonzalo Higuain twice went close to giving them the lead, first with a sliced shot against the post and then with a curler wide.

Tottenham's Harry Kane struggled to make an impression, letting his frustration boil over at one point.

Harry Winks did go close to giving Spurs the lead with a dipping shot against the crossbar.

But, Tottenham lacked their usual conviction in attack and they fell behind when Pedro turned inside Toby Alderweireld before shooting past Lloris from an unpromising angle.

Pedro then showed his defensive qualities with a great tackle on Christian Eriksen as the Dane wriggled through.

Yet, any hope of a Tottenham comeback was eradicated when Trippier and Lloris failed to communicate and Trippier's attempted back pass rolled into an unguarded net.

Tottenham did not have a shot on target and after Saturday's defeat at Burnley, suddenly look vulnerable.

"It wasn't a great game to watch. Of course very, very disappointed but we move on. Two games and two defeats but now it's about being calm," Spurs manager Mauricio Pochettino said.