Tottenham were 1-0 down following Aaron Ramsey`s 16th-minute goal and offered little as a third consecutive Premier League defeat loomed in the early kickoff at Wembley. 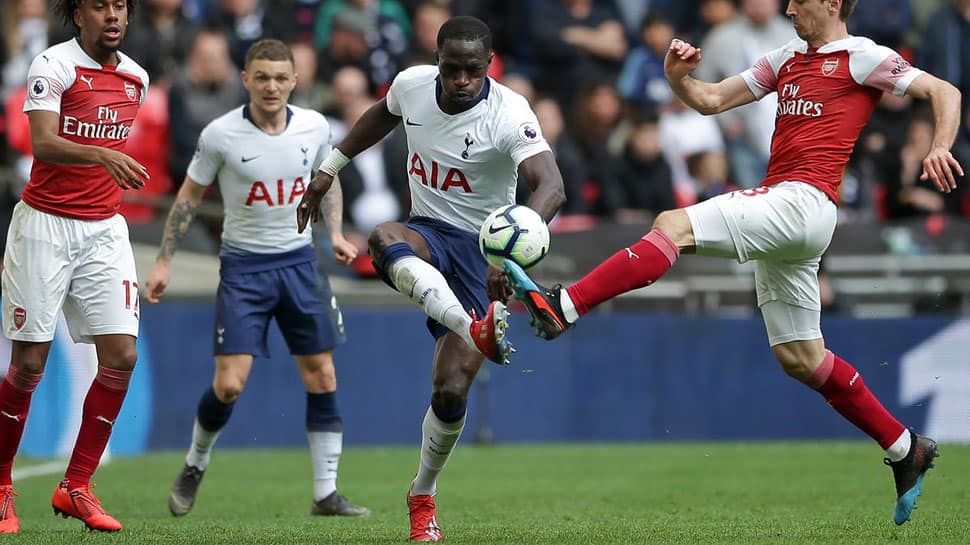 Hugo Lloris saved Pierre-Emerick Aubameyang 90th-minute penalty as a below-par Tottenham Hotspur salvaged what could be a crucial 1-1 draw in a scrappy north London derby against Arsenal on Saturday.

Tottenham were 1-0 down following Aaron Ramsey`s 16th-minute goal and offered little as a third consecutive Premier League defeat loomed in the early kickoff at Wembley.

Harry Kane equalised from the penalty spot in the 74th minute to the relief of the home fans but when Davinson Sanchez conceded a penalty in the 90th minute, it appeared Arsenal were about to move one-point behind their arch-rivals.

Aubameyang, who had tumbled easily under a clumsy Sanchez challenge, struck his kick weakly and Lloris, at fault for both goals in Tottenham`s 2-0 defeat by Chelsea in midweek, plunged down to his right to make a vital save.

A niggly second-half ended with Arsenal`s other substitute Lucas Torreira being red-carded for a high tackle on Danny Rose.

Third-placed Tottenham had not drawn any of their previous 28 Premier League games and will be hugely relieved to have ended that remarkable sequence and keep a four-point gap between themselves and Arsenal in fourth place.

Arsenal, and especially Aubameyang, will be kicking themselves and could lose the fourth spot to Manchester United if they beat struggling Southampton later on Saturday.

Tottenham manager Mauricio Pochettino, celebrating his 47th birthday, had never lost a home league clash against Arsenal, but his side were always playing catch-up after Juventus-bound Ramsey, playing for the last time in the fixture, calmly put his side ahead in the 16th minute.

Sanchez made a hash of dealing with a long ball on the halfway line and Alexandre Lacazette released Ramsey into acres of space before the Welshman advanced on goal and took the ball around Lloris to slide home.

Kane had a header ruled out for offside and Arsenal keeper Bernd Leno made a remarkable double-save just before the interval, blocking Christian Eriksen`s close-range volley with his legs, then palming away Moussa Sissoko`s follow-up.

Lacazette should have doubled Arsenal`s lead in the second half when he sliced wide but Tottenham struggled to make much headway and Erik Lamela`s left-footer just wide was about the closest they came to equalising.

Kane was then adjudged to have been pushed by Shkodran Mustafi in the area and referee Anthony Taylor pointed to the spot. The England captain drilled his penalty low into the corner.

Tottenham might have been expected to go on and win the game but it was Arsenal who finished strongly and will be left to rue not securing a huge win in the battle for a top-four finish.