Aizawl FC finally found their lead when Kromah made no mistake converting a penalty to hand Aizawl FC a 2-1 lead in the 87th minute. 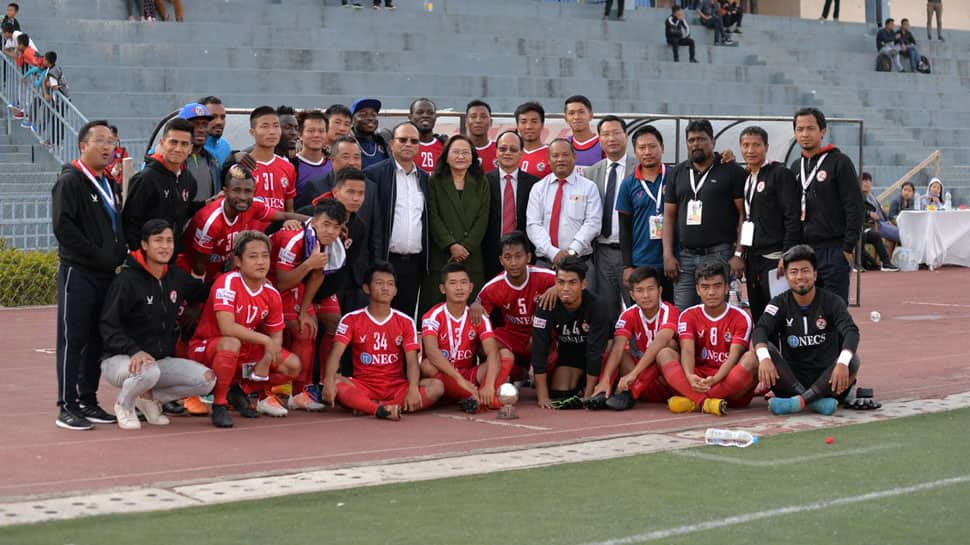 Aizawl FC ended their I-league campaign on a high, notching up a come-from-behind 2-1 win over Churchill Brothers FC on Saturday.

Ansumana Kromah then converted a penalty in the 87th minute to earn the win for Aizawl. Aizawl FC goalkeeper Lalawmpuia was adjudged as the hero of the match.

With this win, Aizawl FC finished their I-League campaign in the seventh place with 24 points, while Churchill Brothers finished their campaign three places above with 34 points.

Churchill started on an attacking note, putting pressure on the home side right from the first minute.

They were penetrating deep quite easily into the Aizawl FC defence and the results soon showed when Churchill Brothers drew first blood as early as the 4th minute.

Plaza scored his 21st goal of the season through a beautiful cross from Nicholas Fernandes to make it 1-0 in Churchill Brothers' favour.

Aizawl FC looked settled by the half-hour mark and started creating chances through the combination of Issac, Lalrinchhanna constantly supplying to Kromah and Lalkhawpuimawia but Churchill's defence was up to the task.

Aizawl finally managed to get an equalizer in the 42nd minute through an own goal from Churchill's Hussain Eldor.

What was interesting about this goal was the pressure that Aizawl FC created on Churchill's defence when an outstanding cross from Lalrinchhanna to Lalkhawpuimawia was hastily interrupted by Eldor, but rather than clearing the ball safely, it ended up straight into the goal.

The second half began with the hosts leading the attack to find a lead. Aizawl FC forwards Kromah and Lalkhawpuimawia kept the pressure up on Churchill Brothers but a combination of great defending and goalkeeping from the visitors ensured that Aizawl do not find a way to the back of the net.

Churchill Brothers, on the other hand, started with their attacks on the counter initially and found their way into the box as well, but lack of a good finish saw both the teams tied at 1-1 for a major part of the second half.

Aizawl FC finally found their lead when Kromah made no mistake converting a penalty to hand Aizawl FC a 2-1 lead in the 87th minute.

Churchill Brothers FC Goa, thereafter, tried to restore parity but it was already too late.