FC Goa registered a 5-1 win against Mumbai City FC in the first leg of the second semi-final in an excellent performance by the visitors. 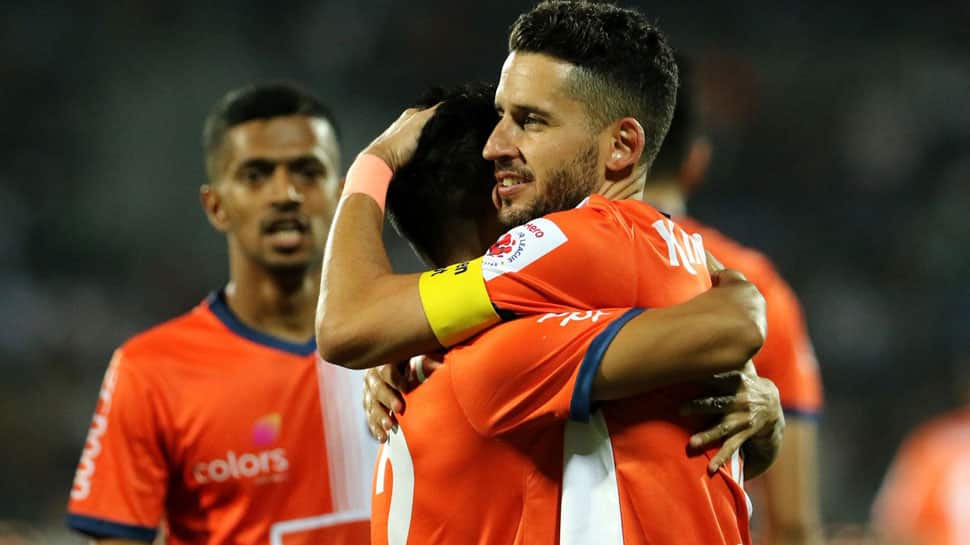 FC Goa registered a 5-1 win against Mumbai City FC in the first leg of the second semi-final. Senegal based footballer Mourtada Fall was the man to watch out for, scoring twice.

# Mumbai City FC have been beaten 5-1 by FC Goa in the first leg of the second semi-final!

# Mumbai City FC will need to score 4 away goals away from home if they wish to qualify for the final considering the current scoreline, which is certainly evident from their attacking gameplay! Mumbai City FC 1-4 FC Goa (80 Minutes)

# Mattias Mirabaje has been subbed in by Mumbai City FC with Baston making his way out!

# Arnold is denied a penalty despite an alleged foul in the box, as the referee indicates that the game will continue! Mumbai City FC 1-4 FC Goa (62 Minutes)

# Goal! Mourtada Fall has scored his second goal of the clash following an incredible header off the corner which makes it 4-1 in favour of the visitors! Mumbai City FC 1-4 FC Goa (60 Minutes)

# Jackichand Singh nearly scores a fourth goal for FC Goa following a long-ranger as goalkeeper Amrinder Singh pulls off a fine save!

51' GOOOOAAAAAALLLLLLLL! @FCGoaOfficial are on a rampage in Mumbai and guess who finds his name on the scoresheet - THE Ferran Corominas. An inch-perfect cross from @jackichand10 is calmly headed home by the Spaniard.

# Mumbai City FC are attempting to go for their shots as the second half kicks off with the hosts trailing by two away goals! Mumbai City FC 1-2 FC Goa (50 Minutes)

# The second half time is set to start shortly!

.@FCGoaOfficial enter the half-time break with a lead after coming back from behind to thump two past @MumbaiCityFC in quick succession.

# Mumbai City FC have had a goal ruled offside following the decision of the referee. Will it prove costly at the end of 90 minutes? Mumbai City FC 1-2 FC Goa (45 Minutes)

31' GOOOAAAALLLLLLL! @FCGoaOfficial equalise with @jackichand10 getting on the scoresheet for the Gaurs. Coromias lets fly from distance which @Amrinder_1 fails to collect and the right winger capitalises on that miss to slot home.

# The Mumbai City FC will be looking to press home the advantage after scoring their first goal of the ISL against the FC Goa this season!

# Second corner of the match for Mumbai City FC as the FC Goa defenders kick the ball away following a powerful save by the keeper! Mumbai City FC 0-0 FC Goa (16 Minutes)

Tackles are flying in during these opening exchanges!

# Nearly a goal for FC Goa following a free kick as goalkeeper Amrinder Singh holds on to the ball after an accurate header! Mumbai City FC 0-0 FC Goa (9 Minutes)

# Can FC Goa put pressure on the hosts by scoring an early away goal?

# The two sides have made their way down to the pitch, with the clash set to kick off soon!

# Here is the FC Goa lineup for the first leg!

Brandon, Peña, Mandar are back in @SergioLobera1's starting XI against Mumbai City FC.

# The FC Goa supporters are attempting to make their presence felt!

The travelling Gaur army are doing their bit to make their presence felt!

# Edu Bedia has lauded the development of FC Goa over the course of the season!

# Mumbai City FC defender Subhashish Bose has promised to deliver his 100% on the field in order to ensure a win the game for his side!

Having suffered two defeats against FC Goa in the league stage, Mumbai City FC would be thirsting for revenge when the two outfits clash in the first- leg semi-final of the Indian Super League (ISL) on Saturday.

FC Goa had defeated Mumbai 5-0 at the Jawaharlal Nehru Stadium in Goa in October, after which the Jorge Costa-coached Mumbai were unbeaten in nine games.

But again it was FC Goa who had snapped their unbeaten run when they defeated them 2-0 at the Mumbai Football Arena here in February.

So when Mumbai take the field with the stakes higher, revenge will also be on their mind, but the hosts know well that they cannot afford to take the visitors lightly.

For the hosts, Modou Sougou has been the star performer having pumped in 12 goals so far. And a lot will depend on how the Senegalese fares in this key contest.

He, along with Arnold Issako of Congo who has six assists to his credit, form a lethal pair.

With a forward like Brazilian Rafael Bastos and an array of mid-fielders, including Sougou, Paulo Machado and Matias Mirabaje to bank on, Mumbai have a strong outfit.

With Romanian Lucian Goian and Subhasish Bose to man it, Mumbai also have a strong defence although it was breached rather easily previously on both the occasions by Goa.

This is an area they would like to tighten up.

The role of experienced goalkeeper Amrinder Singh would also be crucial and he would be hoping to maintain a clean sheet.

Amrinder has been quite impressive in the tournament having 55 saves to his name.

Costa said his team has leant from the mistakes they have committed against Goa in the previous two games.

"We have to see the reality. We have lost two games against FC Goa. I hope there will be a different story tomorrow.

"We made mistakes in the two games against FC Goa but we've learnt from them," said Costa.

Goa have a lethal weapon in the form of Ferran Corominas, who is the leading goal-scorer in the league, having slotted in 15 goals.

If he is allowed to play as he wants, the Mumbai defence will have a harrowing time.

Apart from Corominas, Goa's hopes will also be pinned on the performance of Spaniard Edu Bedia, who plays as central mid-fielder and has seven goals to his name.

Along with Bedia, Jackichand Singh, Mandar Rao Dessai and Zaid Krouch are other mid-fielders for Goa.

The Goa defenders and custodian Laxmikant Kattimani also will have to be on their toes against the Mumbai attack with home crowd behind it.

"The most important thing is our style of football. Of course, you have to take the opposition into account but we have to keep on working on what is our strength - our style," said Tato.