France winger Lemar settled an exciting and open game in the 85th minute, racing towards the far post to meet a pass from midfielder Koke and slam the ball into the net from close range. 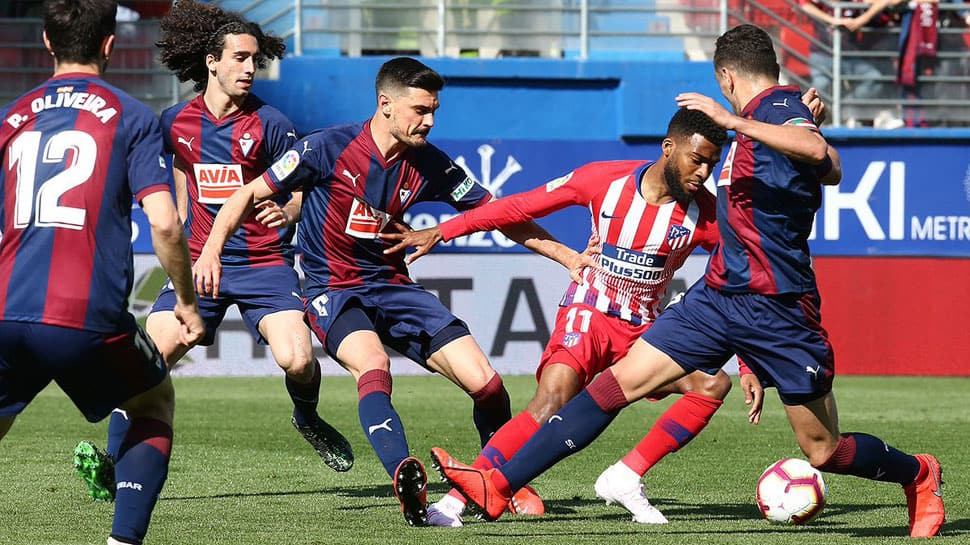 Atletico Madrid`s record signing Thomas Lemar came off the bench to score late on and snatch a 1-0 win at Eibar on Saturday but Diego Simeone`s side remained nine points adrift of La Liga leaders Barcelona at the end of the day.

France winger Lemar settled an exciting and open game in the 85th minute, racing towards the far post to meet a pass from midfielder Koke and slam the ball into the net from close range.

The win took Atletico six points behind Barcelona but the Catalans promptly restored their nine-point advantage at the top by beating Real Sociedad 2-1 at home.

"This is a very important win for us," said Atletico coach Simeone.

"In the first half we thought we could cause them more damage by playing a short passing game and in the second half things were more even and it became clear whoever scored first would win the game. Luckily it was us."

Atletico were without top scorer Antoine Griezmann due to a one-match suspension as well as missing striker Diego Costa, who has been banned for the remainder of the season for insulting a referee.

Yet they still had the better chances and should have taken the lead in the eighth minute when Argentine forward Angel Correa burst into the box but fired straight into the body of Eibar keeper Marko Dmitrovic.

Spain striker Alvaro Morata also had a good chance to break the deadlock for Atletico shortly after the interval but missed the target from inside the box.

Koke later had a shot tipped over the bar from Dmitrovic, who pulled off an even better save to keep out a header from Atleti captain Diego Godin.

Atletico have 68 points after 33 games while Barca have 77 and will wrap up the title if they win their next two games against Alaves and Levante.

They could clinch the trophy on Wednesday if they beat Alaves and Atletico lose to Valencia.