It was the 15th goal of the season for Roofe, who could have doubled his team`s advantage, only to be denied by Roos as Leeds came alive following a sedate opening period. 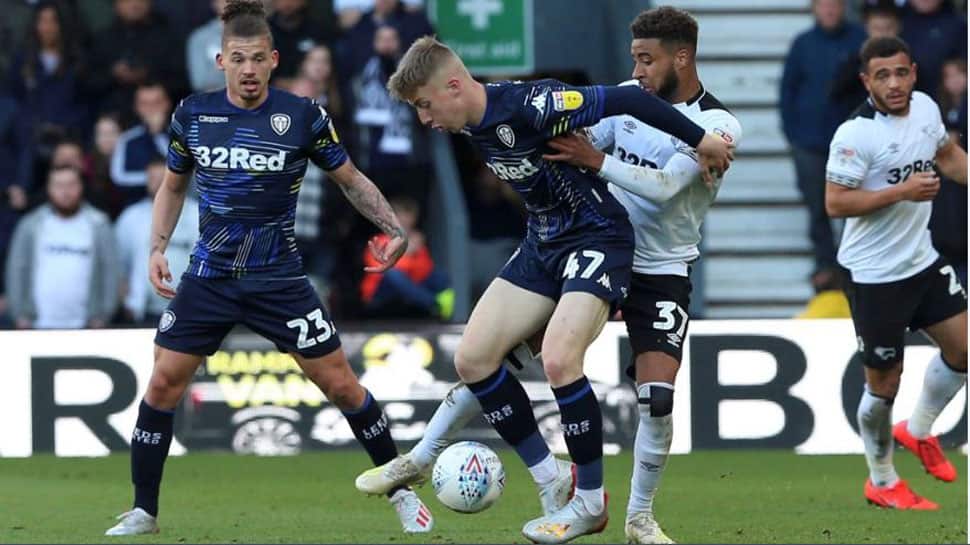 Leeds United striker Kemar Roofe scored in the second half to seal a 1-0 victory over hosts Derby County in the first leg of their Championship play-off semi-final on Saturday.

Roofe, who had struck in both league clashes against Derby this season, collected a fine cross from winger Jack Harrison and tucked the ball past Derby goalkeeper Kelle Roos in the 55th minute to give his team a slender advantage in the tie.

It was the 15th goal of the season for Roofe, who could have doubled his team`s advantage, only to be denied by Roos as Leeds came alive following a sedate opening period.

Derby were awarded a penalty after Harrison appeared to foul Jayden Bogle in the 77th minute, only for referee Craig Pawson to overturn his decision and award a free kick to the visitors after consulting the linesman.

Leeds held on as Derby struggled to create clear chances at home. The teams meet at Elland Road in the second leg on Wednesday.

Aston Villa defeated West Bromwich Albion 2-1 in the first leg of the other semi-final earlier on Saturday. The return leg is at The Hawthorns on Tuesday.

The finalists will meet at Wembley on May 27 to decide who will join Norwich City and Sheffield United in the Premier League next season.