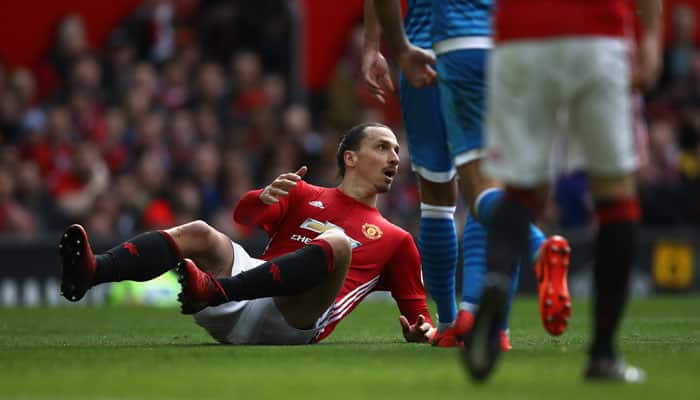 The 35-year-old, United`s leading scorer this season with 26 goals, will also miss the Premier League matches against Middlesbrough and West Bromwich Albion, dealing a significant blow to United`s hopes of snatching a top-four place and a Champions League spot.

However, Ibrahimovic remains available for United`s Europa League tie away to Russian side Rostov on Thursday because FA bans do not apply to European matches.

Mings appeared to deliberately stamp on Ibrahimovic`s head as he jumped over him late in the first half at Old Trafford and the Swedish striker seemed to retaliate moments later by elbowing the defender in the head.

Both players would ordinarily have been facing three-game bans but the FA took the unusual step of saying Monday that in the case of Mings the standard punishment was "clearly insufficient".

Bournemouth, who were reported to be considering an appeal, have until 1800 GMT Tuesday to decide whether to contest the charge against Mings.

On Saturday match referee Kevin Friend spoke to Ibrahimovic, who had already been booked, following his elbow on Mings, but neither player was cautioned.

As a result, the incident was referred to a panel of three former elite referees, who unanimously concluded that both offences merited red cards.

Ibrahimovic, who also had a penalty saved by Bournemouth goalkeeper Artur Boruc during the match, denied elbowing Mings on purpose, saying after the game: "I jump up and jump high and he jumps into my elbow. It is not my intention to hurt someone."

Ibrahimovic has rapidly become a fans` favourite at Old Trafford after linking up again this season with United manager Jose Mourinho, under whom he played at Italian giants Inter Milan, but now the Red Devils must do without him in domestic football until the April 4 visit of Everton at the earliest.

Mings, whose conduct was labelled "disgraceful" by former Liverpool and England defender Jamie Carragher, insisted he had not intentionally stamped on Ibrahimovic`s head.

"I would never do that. That`s not in my game," he said. "Hard and fair is how I like to tackle, but off-the-ball stuff like that isn`t part of my game."

At the very least, Mings stands to miss league matches against West Ham, Swansea and Southampton.

A more severe punishment could also rule him out of the Cherries` fixtures with Liverpool, Chelsea and Tottenham Hotspur.