Already dropped from the starting XI, Rooney has played no part for United for the last month, firstly as a result of a muscle injury and then because he needed root canal treatment to sort out a dental problem. 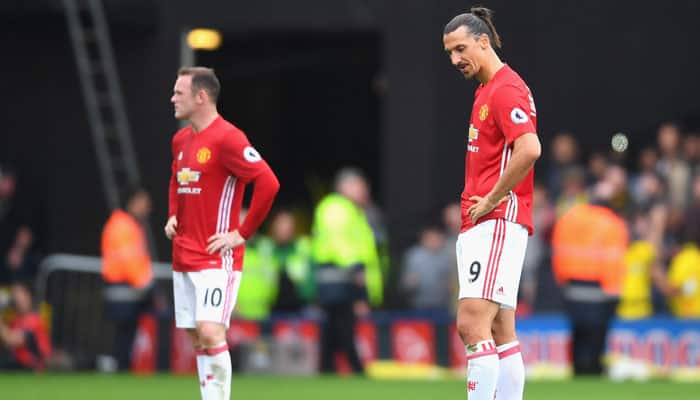 England: Growing uncertainty over the futures of Zlatan Ibrahimovic and Wayne Rooney threatens to overshadow Manchester United`s all-important quest to return to the Champions League.

Ibrahimovic, the former Paris Saint-Germain striker, has been a huge success during his first season in England yet recent comments have cast doubt over whether there will be a second.

Ibrahimovic`s 26th goal for United was the winner as they beat Southampton 3-2 last Sunday to secure the League Cup, their first major trophy under Jose Mourinho`s management.

But asked if he would trigger the 12-month extension option in his one-year contract, the former Sweden international said: "We have another two months of the season to go. Let`s see how I feel, the situation.

"Somebody made up a story that if we don`t qualify for the Champions League, I will not extend. It has nothing to do with that."

The 35-year-old has played his part in a very good spell in the cup competitions for United since their last Premier League fixture on February 11.

His hat-trick saw off Saint-Etienne in the Europa League last 32, he netted the winner against Blackburn Rovers in the FA Cup fifth round and scored twice to see off Southampton at Wembley.

Already dropped from the starting XI, Rooney has played no part for United for the last month, firstly as a result of a muscle injury and then because he needed root canal treatment to sort out a dental problem.

The club captain was an unused substitute against Southampton and has become an increasingly peripheral figure at Old Trafford despite breaking United`s all-time scoring record in January.

The 31-year-old is understood to be considering a return to his former club Everton, whose manager Ronald Koeman admitted on Tuesday that he was interested in signing the England captain.

United, unbeaten in the Premier League since October, are guaranteed to climb up from sixth place with a win against Bournemouth at home on Saturday because the two teams immediately above them, Liverpool and Arsenal, play each other the same day.

A fourth-place finish would mean Champions League football after missing out this term and midfielder Ander Herrera said: "We are playing every week now and the manager understands perfectly what we need.

"Already, we have to focus on Bournemouth as we have to be in the top four. We want to play in the Champions League next season."

Central defender Phil Jones is ready to return after a month out with a foot injury, but attacking midfielder Henrikh Mkhitaryan remains a doubt after missing the League Cup final with a hamstring problem.

Without a win in their last seven league games and having suffered four successive defeats, Bournemouth head to Old Trafford in danger of being dragged towards the bottom three.

Eddie Howe`s side sit in 14th, four points above the bottom three, but with a number of teams below them showing signs of improved form, the Cherries must halt their slide quickly.

Key to their hopes will be their ability to nullify the threat of Ibrahimovic and Bournemouth defender Tyrone Mings is not intimidated by the prospect of facing the forward.

"I watched Zlatan on TV when I was a kid, but that`s the same with everything at the moment," said Mings.

watched. It doesn`t affect me one bit. I`m just trying to learn and impose myself on them.

"If I start getting dazed when playing other opposition, I`d probably start showing them too much respect."