Messi will actually try to spin some of his magic on the Telstar 18 when Argentina take on Russia in a friendly at Moscow`s completely refurbished Luzhniki Stadium on Saturday. 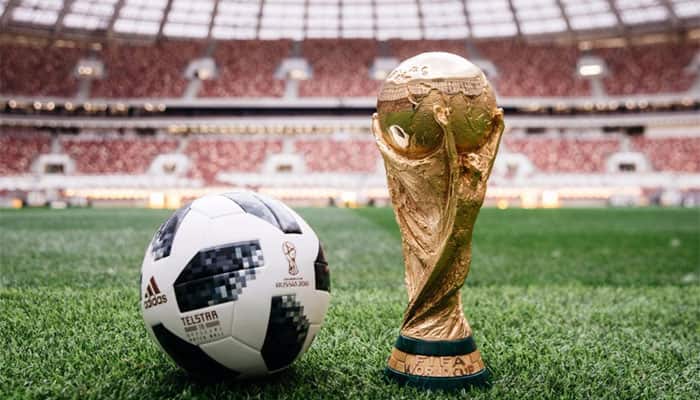 Moscow: What on Earth is Telstar 18?

Several heads were left being scratched on Thursday after Russia used some hardcore techno beats in a dark auditorium decked out to look like an underground dance club to present the official 2018 World Cup ball.

The orb in the spotlight followed the edgy motif of the presentation by being adorned with black-and-grey checkered rectangles that could have featured in one of Hollywood`s latest sci-fi thrillers.

It resembles the work of a studious graphic design artist who just happened to be handed one of the world`s highest-profile assignments.

So how does the ball actually feel?

Argentina`s rather sheepish-looking superstar Lionel Messi was confronted with that question by a hyped-up MC who made his way through swarms of dancers and reporters in an artsy Moscow exhibition hall.

"I like the design, I like the colours, and I would like to try it out on the pitch," Messi said through a translator while a head-bobbing DJ paused in between spinning disks.

The entire event was part entertainment and part an advertisement for Adidas -- the ball`s maker that hopes to reap rich rewards from the June 14-July 15 competition.

Messi will actually try to spin some of his magic on the Telstar 18 when Argentina take on Russia in a friendly at Moscow`s completely refurbished Luzhniki Stadium on Saturday.

The event will be special for the host country because it razed the original stadium -- home to the 1980 Summer Olympic Games as well as some of the Soviet and Russian squads` biggest matches -- in 2013 to make way for the futuristic new structure.

Both Luzhniki Stadium`s and the ball`s performance are much bigger deals than they might seem at first glance.

Controversies over whether balls were too light or uncontrollable for those bend-them-like-Beckham free kicks have dogged many a recent World Cup.

Adidas has said little about Telstar 18 except that it is a modern interpretation of the original Telstar design used in 1970 and 1974 -- golden years for Pele`s Brazil and Franz Beckenbauer`s West Germany.

The name itself is a derivative form of the "star of television" -- the first black-and-white ball made to look sharp in an era when colour TV sets were rare.

Russia hope the spiffy new number will inject life into a lacklustre squad that has underperformed consistently since making a surprise semi-final appearance in the 2008 Euro co-hosted by Austria and Switzerland.

The team crashed out of the 2017 Confederations Cup in the group stages and has faced intense fan and government pressure to show up when it hosts the World Cup for the first time.

The Kremlin, in particular, will be keen to make sure that the Luzhniki pitch will be up to scratch in the wintry weather that has already seen Moscow`s first snow storm.