City won 3-1 at Crystal Palace earlier on Sunday meaning Liverpool have 85 points with four games to go and City are on 83 with an additional match to play. 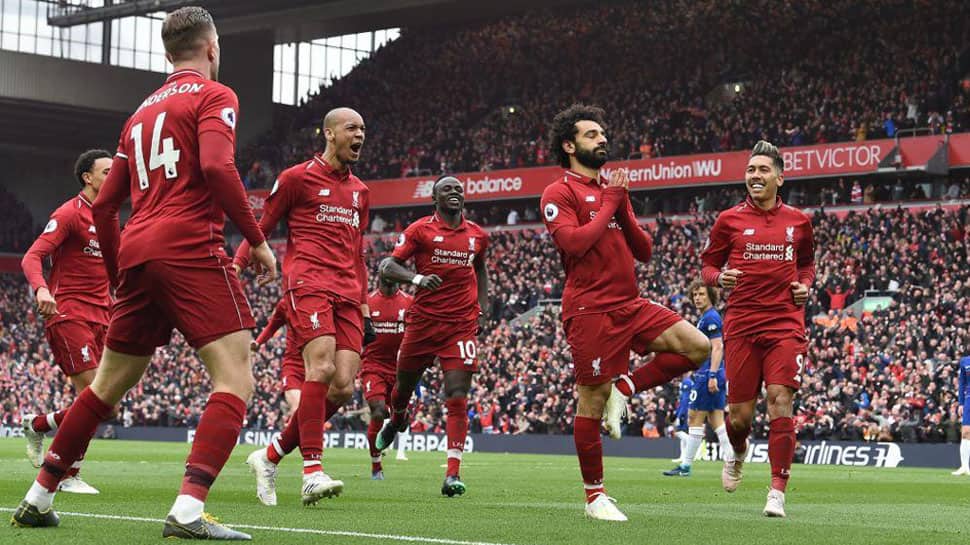 A spectacular strike from Mohamed Salah helped Liverpool maintain their two-point lead over Manchester City in the Premier League title race with a crucial 2-0 win over Chelsea at Anfield on Sunday.

City won 3-1 at Crystal Palace earlier on Sunday meaning Liverpool have 85 points with four games to go and City are on 83 with an additional match to play.

But with Pep Guardiola`s side having to face Tottenham and Manchester United in the next 10 days and Liverpool having no more matches against top six teams, Jurgen Klopp`s side have a glorious chance to end their club`s 29 year wait for a domestic league title.

After a fascinatingly even first half, Liverpool turned on the style after the break with a 51st-minute header from Sadio Mane and then a long-range screamer from Salah two minutes later blowing Chelsea away.

Although the brilliant Eden Hazard hit the post for the visitors, there was a real determination about the way Liverpool approached the second half -- closing down across the field and yet still pushing forward in search of a third to totally kill the game.

That did not come but with only lowly Cardiff City, relegated Huddersfield Town, Newcastle United and Wolves remaining as hurdles, this was the biggest obstacle in Liverpool`s run in, cleared with some margin to spare.

"It`s another big game we have won. We have to concentrate on ourselves, work hard on the training pitch and the focus is on the next game. But we are enjoying it and that`s the main thing," said the England international.

Hazard, playing in a central role, had been a constant threat in the opening half while Liverpool`s cutting edge was not quite there -- Mane going close with a curling effort and a Firmino toe poke forcing Chelsea keeper Kepa Arrizabalaga into action.

Chelsea had arguably had the better of the opening half but whatever Klopp said to his team at the break certainly had the desired effect.

The breakthrough came when Salah weaved into the area, putting the Chelsea defence on the back foot and Henderson picked out Mane at the back post with the Senegalese forward confidently heading home.

If that goal brought a feeling of relief, it was pure joy two minutes later when Salah scored a sensational second -- the Egyptian receiving the ball on the right flank and cutting inside before unleashing an unstoppable drive from 25 metres out into the far, top corner.

Chelsea responded positively, though, with David Luiz picking out Hazard with a ball over the top, the Belgian beating the advancing Alisson Becker only to see his shot bounce out off the post.

Moments later, Becker then had to be alert to keep out a Hazard shot from a Willian cross as Chelsea searched in vain for a way back.

But having been warned, Liverpool were alert to the Hazard threat and they could have had a third themselves in the 89th minute with Mane forcing Arrizabalaga into a reflex save.

The jubilant reaction of the crowd at the final whistle showed the importance of these three points.

The pressure is on City ahead of 10 days which could determine the outcome of this fascinating title race.