Having beaten Spurs in the FA Cup semi-finals on Saturday, Chelsea`s latest win reaffirmed the status of Conte`s side as England`s team to beat. 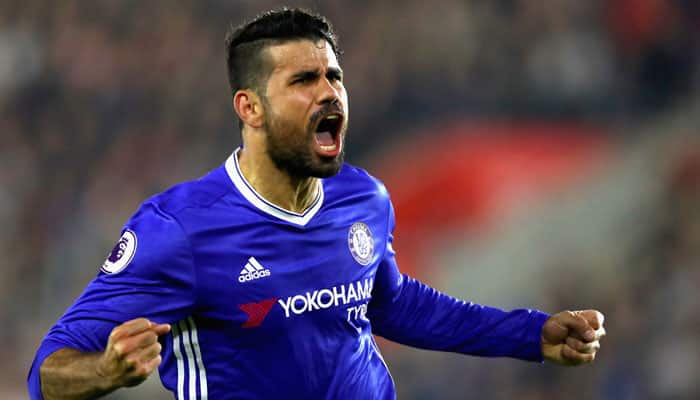 London: Diego Costa scored his 50th and 51st Premier League goals as Chelsea overcame spirited Southampton 4-2 on Tuesday to establish a seven-point lead at the top of the table.

Costa set up Eden Hazard`s early opener, which was cancelled out by Oriol Romeu, before Gary Cahill restored the hosts` lead at an unseasonably cold Stamford Bridge.

"Today I have to be pleased with the effort of my players. It wasn`t easy after a tough game against Tottenham," said Chelsea manager Antonio Conte.

"We must be confident for the future. It`s important to look at ourselves and not the other (Spurs)."

Having beaten Spurs in the FA Cup semi-finals on Saturday, Chelsea`s latest win reaffirmed the status of Conte`s side as England`s team to beat.

They face a thorny trip to Everton this weekend and have now gone 11 league games without a clean sheet -- their longest run since 1996 -- but the finishing line is just five games away.

Hazard, Costa and Cesc Fabregas returned to the Chelsea XI after starting Saturday`s 4-2 win over Tottenham on the bench and they combined for the fifth-minute opener.

Fabregas`s pass from halfway sent Costa scampering away down the inside-right channel and his cut-back was swept into the bottom-left corner by Hazard.

The Belgian forward has now scored 15 goals in a Premier League season for the first time, his highest tally since netting 20 times for Lille in 2011-12.

The trio were at it again shortly after, Costa deftly cushioning Fabregas`s pass into the path of Hazard, who curled well wide.

But there had already been nervy moments in the hosts` penalty area -- an unmarked Jack Stephens volleying tamely at Thibaut Courtois -- and before long Southampton were level.James Ward-Prowse`s corner from the left was inadvertently flicked on by Cesar Azpilicueta and reached the unattended Manolo Gabbiadini at the back post.

The Italian`s cross-shot flicked off Courtois and was tapped in by ex-Chelsea midfielder Romeu, who had last scored in January 2016.

Set-pieces continued to prove the home side`s Achilles heel, with Courtois obliged to swat away a dangerous Ward-Prowse free-kick before Sofiane Boufal thrashed into the side-netting at a corner.

A storming run by N`Golo Kante forced Stephens into a desperate headed clearance and Costa had a penalty appeal turned down, but Chelsea were wavering until Cahill struck in first-half stoppage time.

Kante`s deep cross was helped on by Marcos Alonso and with Costa launching himself into a mid-air scissors kick, the England centre-back charged in bravely to head home.

Costa would not be denied the next time he got a sight of goal in the 53rd minute as he brought up a half-century of league goals on his 85th appearance since signing from Atletico Madrid in 2014.

After a short corner with Hazard, Fabregas lofted a cross to the far post and Costa held off Bertrand to plant a header past Fraser Forster.

Dusan Tadic worked Courtois with a skidding effort and Gabbiadini hit the side-netting after again being left unmarked at a corner, moving Conte to angrily kick a bag beside the dug-out.

Chelsea club captain John Terry came on for the final five minutes and was afforded a standing ovation in his first appearance since announcing he will leave the club at the end of the season.

Costa made it 4-1 with a delightful goal in the 89th minute, swapping passes with first Hazard and then substitute Pedro before drilling a low shot past Forster.

"We played a good team, but it`s a harsh result," said Southampton manager Claude Puel, whose side added a stoppage-time consolation through another Bridge old boy, Ryan Bertrand.

"Eden Hazard and Diego Costa made the difference today."