After Jesus injury during match, Aguero replaced him and took the opportunity to remind everyone of his enduring quality. 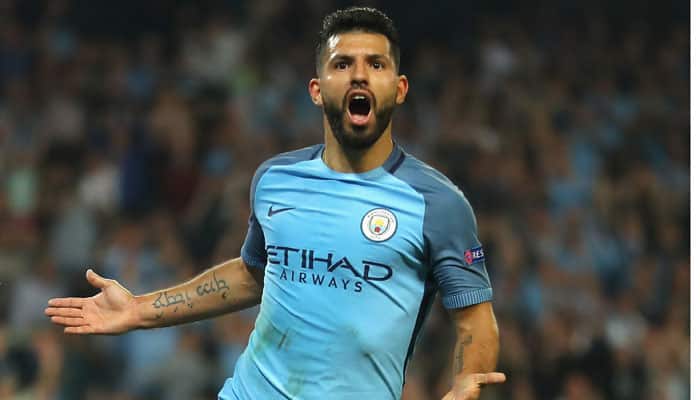 Bournemouth: Sergio Aguero roared back into action for Manchester City, forcing a Tyrone Mings own goal and helping them move eight points behind Premier League leaders Chelsea with a 2-0 win at struggling Bournemouth on Monday.

Aguero was once again left on the bench, amid speculation about his uncertain future at City, as Guardiola preferred his new Brazilian teenage sensation Gabriel Jesus.

But after the youngster`s fairytale start to life in English football was rudely interrupted by an early ankle injury, Aguero replaced him and took the opportunity to remind everyone of his enduring quality after Raheem Sterling had put City ahead just before the half hour.

In the 69th minute, the Argentine slid in to meet a cross from Sterling and, although it appeared Mings got the final touch for an own goal, ultimately, a decision for the dubious goals committee, no-one was going to persuade Aguero that he was not responsible for putting City two up.

Prevailing in an entertaining contest at chilly Dean Court, City always looked likely to stake their claim as Chelsea`s chief rivals for the title by moving back into second place in the table once Sterling slotted in from close range in the 29th minute, soon after he had also hit the post.

Bournemouth thought they had equalised through Josh King straight after Sterling`s goal but the striker was penalised for tugging the shirt of John Stones in the build-up and Eddie Howe`s men, 14th in the table and quickly getting sucked into the relegation battle, still remain without a win in 2017.

Pep Guardiola, City`s manager, was left adamant that the eight-point gap was still too big for his side to breach but he was delighted by both their continued improvement and, in particular, Aguero`s contribution.

"He played good, he won, he fight, scored a goal for his confidence and for us, it`s so important. I`m so happy for him," said the manager.

Bournemouth had set a blistering pace and pressed high, severely testing City`s preference for playing the ball out of defence.

As the half hour approached, City had a lucky escape when winger Jordon Ibe broke through on the right after a one-two with midfielder Jack Wilshere and shot low but Willy Caballero spread himself well saving with his right foot.

The next time City attacked they opened the scoring when Leroy Sane crossed from the left, the ball took a slight deflection off defender Steve Cook on its way to the far post and Sterling turned it into the net.

Sterling was full of praise for Bournemouth but also relieved to have found the net.

"They play amazing football at times and you`ve seen that throughout the game today. Credit to them, they pushed and pushed," the England forward, who has now scored seven goals in five games against Bournemouth, said.

"Luckily today we got the two goals that gave us the win. I was just trying to get on the scoresheet. It doesn`t always happen but it`s part of my game and I need to add more goals to my game."

Bournemouth kept up their momentum after the break making it even harder for City to move play out of their half and Caballero made a fine diving save from Harry Arter.

Yet the change in central striker since Jesus`s arrival has not altered the balance of the settled side Pep Guardiola has found since the 3-0 FA Cup win at Crystal Palace last month and they were always the more dangerous team on the break.

Sane almost made it three when his effort from the left came back off the bar and again in stoppage time when he shot wide of the far post with only Boruc to beat.