Ajax, who have won the trophy four times, most recently in 1995, reached the quarterfinals of Europe`s top competition for the first time since 2003. 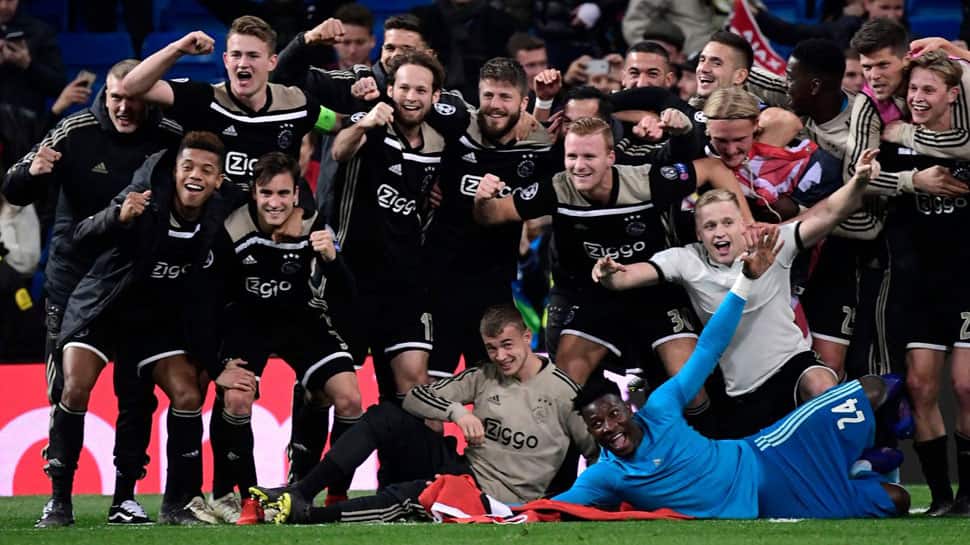 Defending champions Real Madrid were knocked out of the Champions League in sensational fashion on Tuesday after being thrashed 4-1 at home by an outstanding Ajax Amsterdam who overturned a first-leg deficit to reach the quarter-finals 5-3 on aggregate.

Moroccan midfielder Hakim Ziyech fired Ajax into a shock seventh-minute lead following a pass from the outstanding Dusan Tadic, who also provided the pass for David Neres to double the Dutch side`s advantage in the 18th.

Madrid, who were missing inspirational captain Sergio Ramos through suspension and hit the woodwork twice in the first half, came out stronger after the interval but were dealt a fatal blow when Serbia international Tadic smashed a shot into the top corner in the 62nd minute.

Substitute Marco Asensio gave Madrid a glimmer of hope by striking back but it was quickly extinguished by a breathtaking free kick from Lasse Schone, condemning Real to a fourth consecutive home defeat in all competitions.

Things got worse for the hosts, who had won the last three Champions League titles in a row when Nacho was sent off in stoppage time for two bookings.

Ajax, who have won the trophy four times, most recently in 1995, reached the quarterfinals of Europe`s top competition for the first time since 2003.

Thirteen-time winners Madrid, who have lifted the trophy in four of the last five years, and had reached at least the semi-finals for the last eight seasons, suffered their earliest elimination since 2010.

Madrid, who had suffered consecutive home defeats to Barcelona in the run-up to the game and are an embarrassing 12 points behind the Catalans in La Liga, endured rotten fortune throughout the game, losing Lucas Vazquez and livewire Brazilian teenager Vinicius Junior to injury in the first half.

The night could have gone very differently had Madrid defender Raphael Varane headed under the crossbar instead of against it in the fifth minute, moments before Ziyech scored.

Ajax had Madrid on the ropes after the second goal and should have further increased their advantage, as Neres chipped wide when clean through against Madrid keeper Thibaut Courtois.

The Belgian later leapt across his goal to parry a shot from Ziyech and used his body to thwart Tadic.

He made some more impressive saves in the second half but was powerless to stop Tadic`s thunderbolt and was caught out by Schone`s free kick, which looked to be a cross but went straight in.

Real substitute Gareth Bale blasted against the near post in the first half and suffered a painful end to the match. The Wales forward was forced to stay on the pitch after appearing to injure his ankle late on as coach Santiago Solari had used all three substitutes.