Serie-A: Napoli return to form with victory to send Frosinone towards the drop

The Belgian’s superb first-half free-kick was his 81st league strike for Napoli, sending him level with the Argentine at number three in the club`s all-time Serie A scoring charts, behind Antonio Vojak (102 goals) and Marek Hamsik (100). 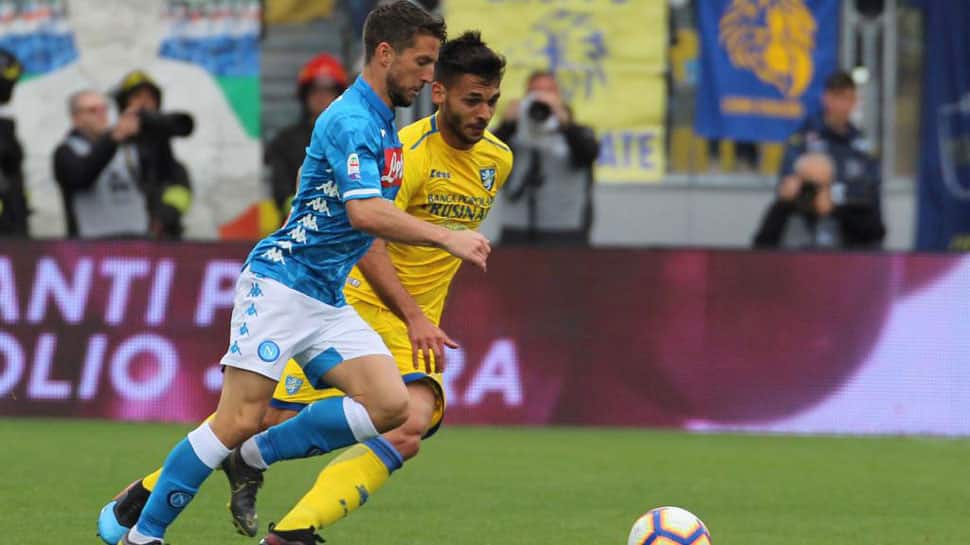 Napoli pushed Frosinone towards relegation with a 2-0 away victory in Serie A on Sunday as Dries Mertens equalled Diego Maradona’s league scoring record.

The Belgian’s superb first-half free-kick was his 81st league strike for Napoli, sending him level with the Argentine at number three in the club`s all-time Serie A scoring charts, behind Antonio Vojak (102 goals) and Marek Hamsik (100).

Amin Younes topped off an impressive individual performance with a neat finish in the second half, leaving Carlo Ancelotti’s side in second place on 70 points, eight clear of Inter Milan below them.

Frosinone, in 19th place, are now 10 points adrift of the safety zone with four rounds remaining and their relegation will be confirmed if Genoa earn at least a point away to SPAL on Sunday and Udinese win away to Atalanta on Monday.

Napoli were under pressure to deliver a result after a run of just one win in six matches, including a 3-0 aggregate Europa League quarter-final defeat to Arsenal.

That led fans to produce a banner in the city centre on Saturday night that read: “Carletto (Ancelotti) the latest chosen one to take the fans for a ride with no real project."

Frosinone threatened first at the Stadio Benito Stirpe as Andrea Pinamonti pulled a shot just wide, but Mertens put the visitors in front with a looping free kick after 19 minutes, the striker’s fifth goal in his last seven league appearances.

The lively Younes doubled his side’s lead early in the second half, skipping past his marker before sliding a composed finish into the bottom corner.

Ancelotti’s side came agonisingly close to a third when Jose Callejon, making his 300th Napoli appearance, fired a shot off the post and the rebound fell into the path of Fabian Ruiz, who smashed a shot off the crossbar from 12 yards.

Callejon was denied by the woodwork again in stoppage time when his low shot came back off the outside of the post.