Israel were held 1-1 at home by Slovenia, while Macedonia beat Latvia 3-1 in the group`s other two games. 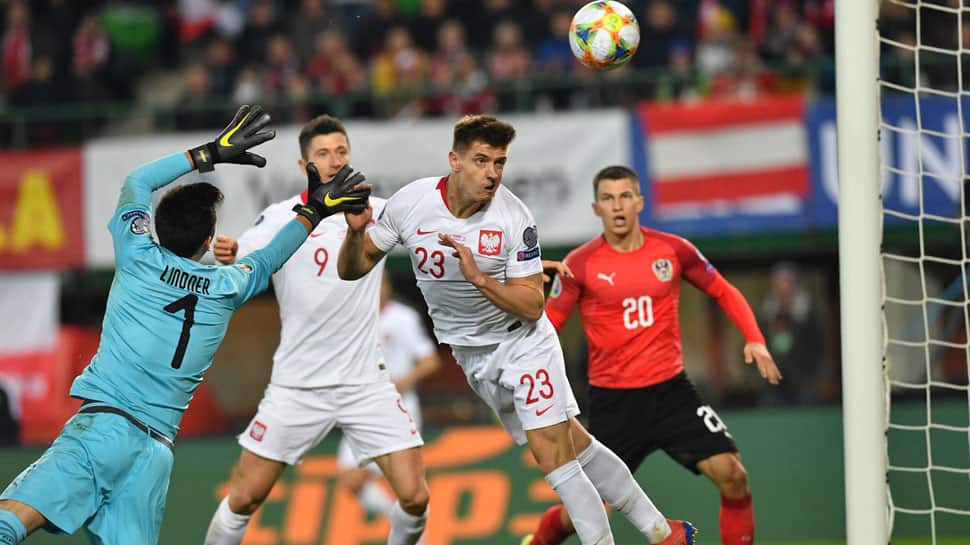 Poland forward Krzysztof Piatek continued his prolific season by scoring 10 minutes after coming off the bench to secure a 1-0 win away to Austria in their opening Euro 2020 qualifier.

Israel were held 1-1 at home by Slovenia, while Macedonia beat Latvia 3-1 in the group`s other two games.

Piatek, Serie A`s second highest scorer this season with 19 goals for Genoa and then AC Milan, headed in after 69 minutes as the hosts paid for their poor finishing in the Group G game.

Poland had a huge let-off near the end when they allowed Austria substitute Marc Janko a free header from Maximilian Woeber`s cross but the veteran forward incredibly sent his effort wide from three metres.

The hosts had made a bright start as Poland goalkeeper Wojciech Szczesny parried Marcel Sabitzer`s shot after eight minutes and Marco Arnautovic scuffed his shot when Stefan Lainer`s low cross found him free in the penalty area.

Austria goalkeeper Heinz Lindner made one first-half save, turning Kamil Grosicki`s low drive past the post.

The home side`s Valentino Lazaro shot wide and Arnautovic was centimetres away with a free kick as Austria continued to press forward but it was Poland who went ahead.

Austria failed to properly clear a corner and the ball fell to Tomasz Kedziora whose strike was parried by Lindner but fell to Piatek who headed home.

Piatek should have added another goal minutes later when he was sent clear by Robert Lewandowski but he fired wide. After Janko`s extraordinary miss, Szczesny also came to the rescue with an excellent save from David Alaba.

Slovenia`s Andraz Sporar beat two defenders to poke the ball home and give his side the lead three minutes after halftime in Haifa but Ervan Zahavi levelled from a corner in the 55th minute to extend the visitors`s winless run to nine competitive games.

Ezgjan Alioski gave Macedonia, which last month was renamed North Macedonia, an 11th minute lead after being set up by veteran Goran Pandev, who was also involved as Eljif Elmas added a second goal before halftime.

Macedonia`s Darko Velkoski scored an own goal with three minutes left but Latvia then had Andrejs Ciganiks sent off for a second bookable offence and Elmas grabbed his second of the night with a clever chip in the last minute.

The next round of games on Sunday sees Austria travel to Israel, Macedonia visiting Slovenia and Poland hosting Latvia.