Forward Lucas struck his first treble since moving to Europe and joining Paris St Germain in 2013 as Spurs cemented their position in the Premier League top four with a thumping win over the already-relegated visitors at their new stadium. 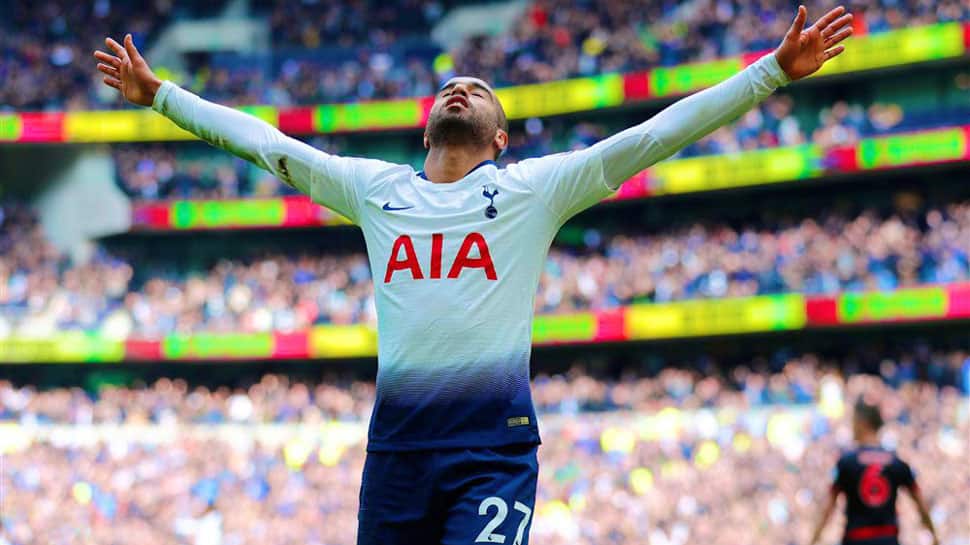 Tottenham Hotspur`s Lucas Moura has not played a major part in their season so far but the Brazilian`s stunning hat-trick in a 4-0 victory over Huddersfield Town on Saturday showed he is ready to step up in the absence of the injured Harry Kane.

Forward Lucas struck his first treble since moving to Europe and joining Paris St Germain in 2013 as Spurs cemented their position in the Premier League top four with a thumping win over the already-relegated visitors at their new stadium.

He fired their second goal in the first half with a low drive, after Victor Wanyama had opened the scoring, and found the net again with two deadly strikes in six minutes near the end of a match Spurs always looked like winning comfortably.

The 26-year-old Lucas was understandably all smiles at the end and even brought his one-year-old son Miguel on to the pitch after the final whistle to the delight of the home fans.

"It was very emotional for him," manager Mauricio Pochettino, who made seven changes to his team, told reporters. "It`s his first hat-trick in Europe. It`s a nice moment for him to share this with his son and his family.

"When you have 25 players they need to have the opportunity to play. I`m happy for Lucas. His hat-trick is going to help his confidence. We have a very tough period ahead. We need all the players and with confidence, it`s going to be better."

Lucas, who started out playing for Sao Paulo and has 35 caps for Brazil, joined Spurs from PSG in the 2018 January transfer window for a reported fee of 25 million pounds ($32.70 million) with Pochettino hoping his electric pace would unlock defences.

After scoring twice in a 3-0 win at Manchester United in August he seemed set to light up the English top flight this season but although the Brazilian has made 27 appearances in the Premier League this term many have been off the bench.

On Saturday, he provided a finishing masterclass that impressed Pochettino as Lucas staked a claim for a more regular starting spot, especially with Spurs talisman Kane sidelined for several weeks with an ankle injury.

"I have no words to explain this moment," Lucas said. "I`m happy first for my team. We did very well today with a good performance and, of course, to score my first hat-trick here in the new stadium with my family and son here... I am so happy."

A place in the starting lineup against Manchester City in Wednesday`s Champions League quarter-final second leg, which Spurs lead 1-0, would ensure he keeps a smile on his face.

"Now we have a good battle in Manchester; we need from now to recover for this game and prepare very well," he added. "It will be so hard there but if we play like we did today we can go there and get a good result and we can qualify."