Mickelson, playing in the biennial event for a record 12th time, was benched by captain Jim Furyk for Saturday`s fourballs and foursomes. 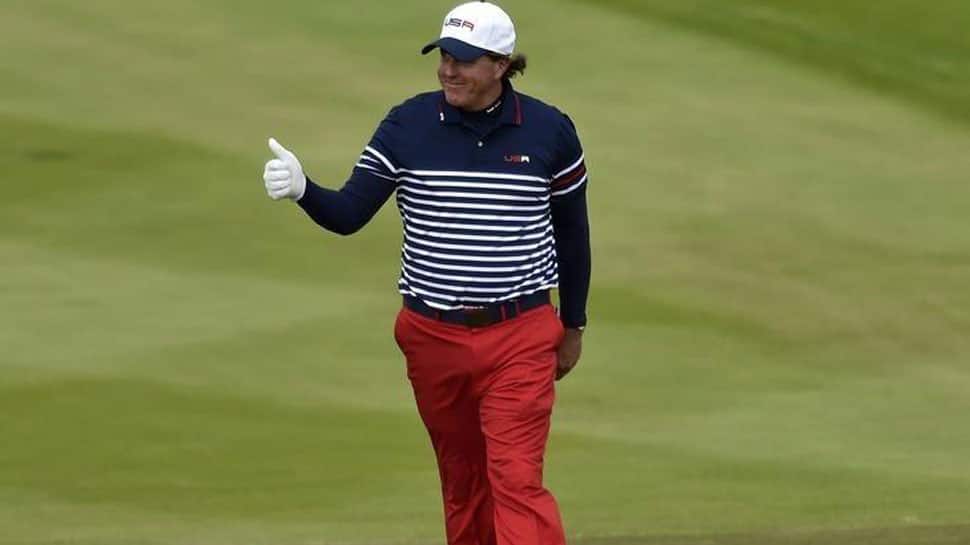 American Phil Mickelson will set a record on Sunday when he plays his 47th Ryder Cup match, but he will have to turn his form around to avoid it being an unhappy milestone.

Mickelson, playing in the biennial event for a record 12th time, was benched by captain Jim Furyk for Saturday`s fourballs and foursomes. Instead of being at the centre of the action, as he so often has been for the United States, the five-times major winner split his day between being a cheerleader and working on his game on the range in the hope of rectifying what ails him.

Never the straightest of drivers even at the peak of his career, the 48-year-old is not an ideal fit for the tight Le Golf National course, where the long rough routinely punishes errant shots. And if the course on its own is not daunting enough, Mickelson, in the ninth match on Sunday, faces accurate British Open champion Francesco Molinari, who has teamed up with rookie Tommy Fleetwood to win all four of their matches this week.

If the Americans, four points down starting the 12 singles matches, get off to a hot start, Mickelson`s match could prove absolutely crucial. Furyk expressed confidence in his man, not that he could say much else.

"He fully understood the role that he had today, gave me a pat on the back and put his arm around me ... (and) said he would be ready tomorrow," Furyk said. "He`s got a lot of confidence in himself. He`s a Hall of Famer and he`s added so much to these teams in the past, and this week.

"I probably didn`t envision him playing two matches. I envisioned more, but that`s the way it worked out and that`s the way we thought we had to go. He wants to be out there, just like everyone else."

Mickelson will pass Nick Faldo`s record for the most Ryder Cup matches played on Sunday.

It could mark the end of a Ryder Cup career that has never quite matched the heights of his individual record. Mickelson has 18 wins, 20 losses and seven halves, though Furyk said his presence brought some intangibles to the team.

"He`s funny, he`s sarcastic, witty, likes to poke fun at people, and he`s a great guy to have in the team room," he explained. "I think the younger players had fun having a go at him, as well, this week, which was fun to see. He provides a lot more than just play."