IMD also issued red, orange and yellow warnings for various regions across Gujarat ahead of the heavy rainfall prediction.

Extremely heavy rainfall are likely to lash across the state of Gujarat on Tuesday, predicted the India Metereological Department. The heavy showers will continue for till Thursday, August 29, added the weather department.

Fishermen have been advised not to venture into these areas.

The weather agency has also issued red, orange and yellow warnings for various regions across Gujarat ahead of heavy rainfall prediction. 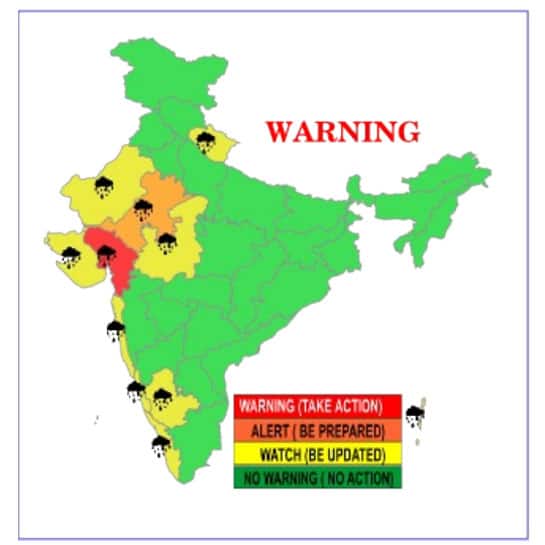 Fairly widespread rainfall is also expected over Odisha, Jharkhand, Chhattisgarh, Vidarbha, Madhya Pradesh and Rajasthan over the next 24 hours.

“ The monsoon trough is active with embedded cyclonic circulation over north Odisha & neighbourhood. Its western part is likely to remain to the south of its normal position during next 2 days. A fresh low pressure area is likely to develop over north Bay of Bengal & neighbourhood around 28th August,” said the IMD.

Widespread rainfall activity is also likely over central, northwest and northeast India and along West Coast, while the rest of the country will receive isolated and scattered showers.