Meet Salim Sheikh, Gujarat bus driver who risked his life to save Amarnath yatris; to be nominated for bravery award

If Salim, the driver of the bus ferrying Amarnath Yatris, had not acted wisely and shown exemplary courage, the brazen terror attack would have certainly claimed more innocent lives. 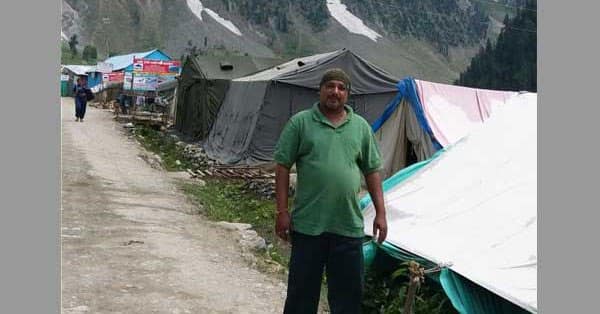 Ahmedabad: If Salim, the driver of the bus ferrying Amarnath Yatris, had not acted wisely and shown exemplary courage, the brazen terror attack would have certainly claimed more innocent lives.

Salim, the Gujarati driver of the bus that was ferrying the passengers, has now emerged as a hero by saving so many innocent lives while risking his own.

According to reports, Salim drove the bus to safety amid continuous firing by a group of heavily armed terrorists who attacked the bus which was returning from the Amarnath Shrine.

Despite being reportedly hit by a bullet, Salim locked the door from inside, refraining terrorists from entering into the bus.

Realising that if he stops the bus, terrorist would kill many innocent yatris, Salim drove for nearly two kilometers before finally stopping near an army camp.

"I spoke to the passengers and they were all praises for the driver. He drove despite the firing and took them to safety. It made a lot of difference and lives were saved. He did not stop. Had he stopped, more lives could have been lost," Munir Khan, IG, Kashmir, told reporters.

One of the survivors of the attack also praised Salim for his bravery and said, ''We were asleep and were woken up by bullet sounds. He continued to drive and took us to safety. If not for him, it would have been worse."

Back home in Gujarat's Valsad, Salim's family also expressed satisfaction that he managed to save several lives.

"He called me at around 9.30 pm and said that there was firing. Salim did not stop when terrorists fired but only looked for a safer spot for the pilgrims. He could not save seven lives but managed to move over 50 people to a safe place. We are very proud of him," said Javed, Salim's cousin.

Later, speaking to reporters, Salim said, ''God gave me strength to keep moving, and I just did not stop.''

Gujarat Chief Minister Vijat Rupani, who announced ex-gratia of Rs 10 lakh to the kin of victims and Rs 2 lakh for injured, said that he will nominate driver Salim for bravery award.

There were initial reports that the bus was not registered for the Amarnath Yatra and the driver had committed some lapses on his part.

However, the Jammu and Kashmir Police has rejected such reports and stated that reports of the bus not being registered were far from the truth.

"The bus was very much registered for Amarnath Yatra and they were also in a convoy. "They had finished their darshan just two days ago and had plans of visiting a few tourist places. Yes, they were on a different route than the yatra route but the bus was registered and in a convoy," Munir Khan added.

The bus, which came under a dastardly terror attack on Monday evening, was from Gujarat, and all pilgrims were from the same state.

The bus - GJ 09 Z 9976 - was registered in North Gujarat's Sabarkantha district, but the owner had sold the bus to one Jawahar Desai of Valsad, Gujarat.

Of the seven pilgrims - five women and two men - who lost their lives, two were from Valsad, two from Dharampur, two from Pardi and one from Vansda. Another fifteen sustained injuries, four of them serious wounds.