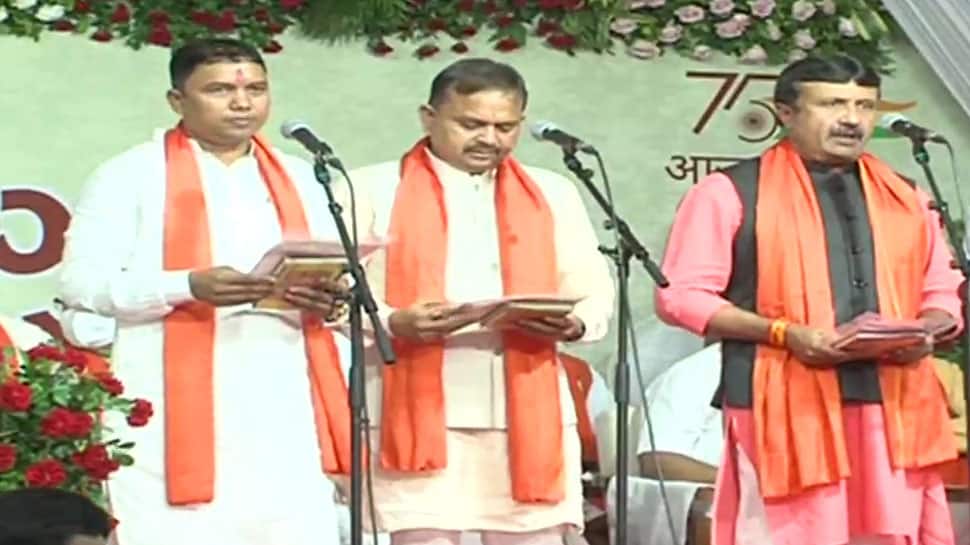 New Delhi: Gujarat Chief Minister Bhupendra Patel on Thursday inducted several new faces in the state cabinet despite strong dissent among those who were part of the previous Vijay Rupani-led cabinet but dropped this time.

According to reports, Harsh Sanghvi, Jagdish Panchal, Brijesh Merja, Jitu Choudhary, Manisha Vakil were sworn in as Ministers of State with independent charge.

A total of 24 ministers have been sworn in the new cabinet, in the presence of Gujarat Chief Minister Bhupendra Patel and former CM Vijay Rupani. pic.twitter.com/LkzhOECTCg

Rajendra Trivedi, who had resigned as Assembly Speaker earlier today, was among those who took oath as ministers today. A large number of ministers who were part of the cabinet headed by previous Chief Minister Vijay Rupani were dropped in the process.

The oath ceremony of the new cabinet of Gujarat Chief Minister Bhupendra Patel, which was slated to be held on Wednesday, was deferred at the last minute after elaborate arrangements were made at the Governor's house and large hoardings were put up.

Sources said that differences over the new council of ministers were possibly the reason for the sudden rescheduling.

The reshuffle in the Gujarat cabinet was done in view of indications that winning the crucial upcoming assembly election in Gujarat would have become a challenge if Vijay Rupani had continued as Chief Minister.

Union Home Minister Amit Shah and top BJP leaders, including Narendra Tomar and Prahlad Joshi, had held a series of meetings after the swearing-in ceremony of Bhupendra Patel on Monday to sort out the issues over the council of ministers and the new cabinet.

It may be noted that Bhupendra Patel took oath as the 17th Chief Minister of Gujarat on Monday. The party is counting on Patel to shore up the party`s fortunes ahead of the assembly elections towards the end of next year.