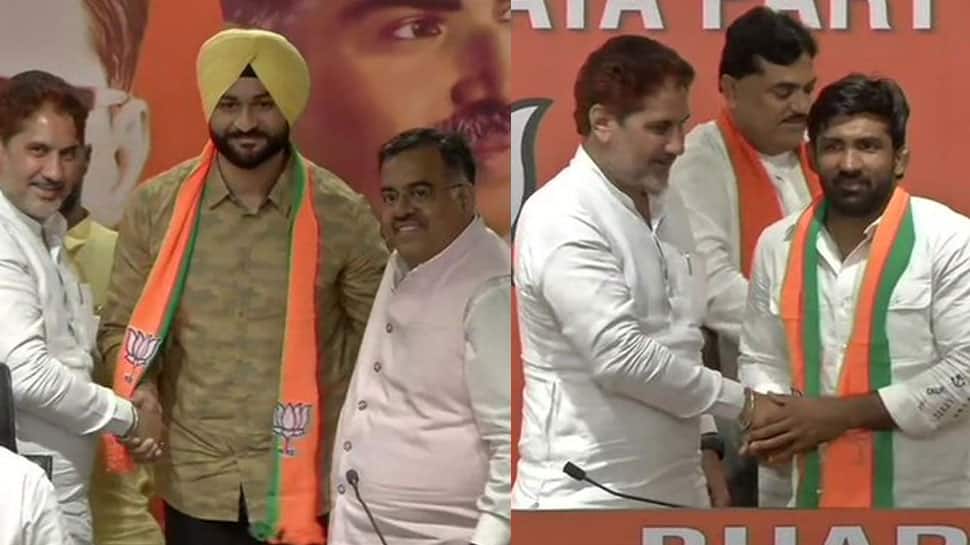 Chandigarh: Former Indian Hockey captain Sandeep Singh and Olympic medallist wrestler Yogeshwar Dutt along with Shiromani Akali Dal (SAD) MLA Balkaur Singh joined the BJP in Haryana on Thursday. The former hockey captain, wrestler Yogeshwar and the SAD MLA were inducted into the saffron party around 4 PM in the presence of Subhash Barala, the state BJP chief in Haryana.

Sandeep Singh might contest the upcoming assembly election in Haryana from the Pehowa constituency, a small town in Kurukshetra district of Haryana.

Speaking to media after formally joining the party, Sandeep Singh said, ''I have joined politics as I am impressed with PM Narendra Modi. His honesty drew me to the party. Both PM and Haryana CM are doing a lot for the youth. If the party considers me capable of contesting elections then I surely will.''

On his turn, Yogeshwar Dutt said, ''As a youth, I want to work for the nation. PM Modi abrogated Article 370 from Jammu and Kashmir, he achieved the impossible. I am very impressed with him. The country is happy after the abrogation of Article 370.''

Yogeshwar Dutt is likely to get party's ticket to contest the upcoming assembly election from the Baroda constituency, which is his home district.

Born on February 27, 1986, Sandeep Singh is a professional hockey player who led the Indian Hockey Team towards victory in the Sultan Azlan Shah Cup in 2009 after defeating Malaysia in the finals at Ipoh. Popularly known as Flicker Singh, Sandeep was a penalty corner specialist in the Indian Hockey team and currently holds a DSP rank in the Haryana Police.

On August 22, 2006, 20-year-old Sandeep was seriously injured after being hit by an accidental gunshot in the Kalka Shatabdi Express train, when he was on his way to join the national team for the World Cup in Africa. He was almost paralysed and on the wheelchair for one year of his life. Sandeep not only recovered from that injury but also established himself again and played world cup for India in 2010 Indian team. In the same year, he was honoured with the Arjuna Award for his invaluable contributions in the field of hockey.

The assembly election in Haryana are due to be held on October 21 and the results would be declared on October 24.