Voting will be held on Monday, October 21 in both the states amid unprecedented security cover and results will be declared on October 24. 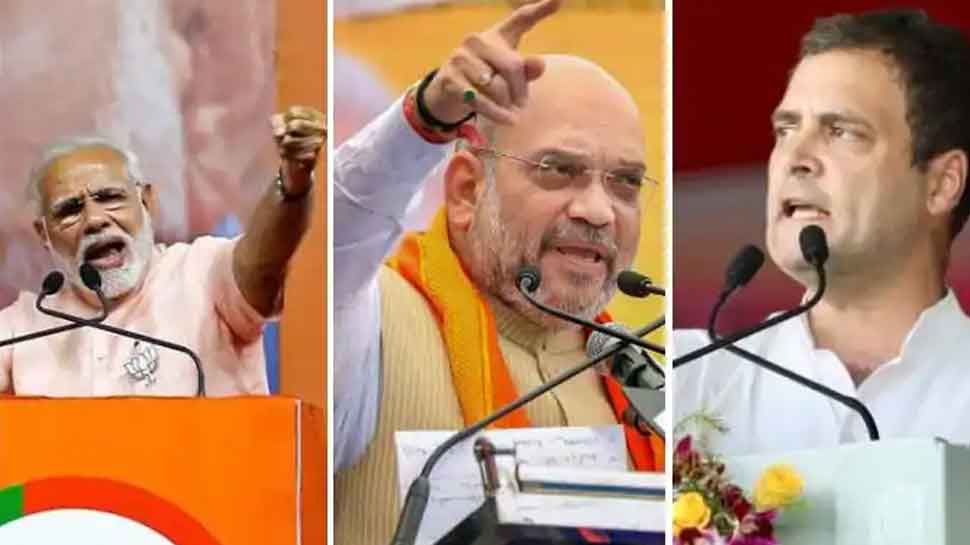 NEW DELHI: High-decibel campaigning for assembly election in Maharashtra and Haryana came to an end on Saturday evening. The last day of electioneering saw top political leaders making their last-ditch attempt to woo voters in the two states with lofty promises and various sops.

Voting will be held on Monday, October 21 in both the states amid unprecedented security cover. Electioneering for by-polls to two Lok Sabha constituencies and 51 Assembly seats in 17 States also came to an end today. Polling on these seats will also take place on Monday, October 21.

Counting of votes for both the Assembly polls and the by-elections will be held on the October 24.

Besides the Bharatiya Janata Party (BJP), the Congress, the Indian National Lok Dal (INLD), the Jannayak Janata Party (JJP) and other players are in the contest for the October 21 single-phase election to 90 seats in the BJP-ruled state. Political observers say the main contest is largely between the BJP and the Congress.

Riding high on pro-incumbency and the ''Modi wave'', BJP`s Chief Minister Manohar Lal Khattar believes he will take his party`s tally to `75 plus` from the present 47 legislators, while Congress` two-time Chief Minister Bhupinder Singh Hooda has been raising the pitch against unemployment, law and order and lack of development.

Focusing on farmers, labourers, youth and industrialists, the saffron party manifesto pledges to give an interest-free crop loan of up to Rs 3 lakh to farmers and promises to complete a target of Rs 5,000 crore interest and penalty waiver on crop loans taken from cooperative banks.

The Chautala clan-led INLD, as well as its offshoot Dushyant Chautala`s JJP, are also trying to make a dent in the votes of the two parties. Some seats are likely to see a triangular contest.

In his addresses, PM Modi didn't forget to remind the public that Monday being a holiday owing to polling, making it an extended weekend, they should not miss the opportunity to exercise their franchise.

The Congress had a list of star campaigners, including Priyanka Gandhi Vadra but she did not step out to campaign for the party in Haryana. Congress interim president Sonia Gandhi had to campaign in one rally but, at the last moment, it was cancelled due to her illness. Instead, Rahul Gandhi addressed the rally. Rahul addressed three rallies in Haryana. The party could not match the BJP`s carpet bombing by Modi and his Cabinet colleagues Amit Shah and Rajnath Singh.

The Prime Minister targeted the Congress and the Gandhi family but it was left to Rahul to defend the party on core issues.

Hansi has a maximum of 25 candidates in the running, while Ambala Cantt and Shahbad have just six. Narnaul is the smallest constituency in terms of voters, with just 1,44,066 electorate, while Badshahpur is the largest, with 3,96,281 voters.

According to Chief Electoral Officer Anurag Agarwal, the polling would be held on October 21 from 7 am to 6 pm.

The campaigning for assembly election in Maharashtra, where the ruling BJP is seeking a second straight term under Chief Minister Devendra Fadnavis, also ended on Saturday evening.

The main contest here is between the "Mahayuti" or grand alliance led by the BJP and the "maha-aghadi" (front) led by the Congress and the NCP.

Centre's recent move to abrogate Article 370 in J&K largely dominated the election campaign here among other local issues. From the opposition's perspective, it was perhaps the most lacklustre canvassing with the exception of a few rallies addressed by Rahul Gandhi who highlighted issues like the economic slowdown, unemployment, "failure" of demonetisation exercise and GST rollout.

On the other hand, Prime Minister Narendra Modi and top BJP brass of the BJP, including Union ministers, raised Article 370 and Opposition's "objection" to withdraw the special status of Jammu and Kashmir. The PM also spoke about "corrupt" leadership of the Opposition.

For its part, the opposition camp raised the issues of economic slowdown and joblessness but appeared lacking in projecting itself as a strong alternative to the BJP narrative.

The bypoll for Satara Lok Sabha constituency will also be held on October 21. Former NCP leader and sitting MP Udayanraje Bhosale is in the fray from the seat on a BJP ticket against Shriniwas Patil of the Congress-NCP combine.

Among other parties, the Maharashtra Navnirman Sena (MNS), led by Raj Thackeray, has fielded 101 candidates, the CPI 16, the CPM 8. The BSP has fielded candidates in 262 constituencies. A total of 1400 Independents are also in the poll arena.

The electioneering in Maharashtra was marked by personal attacks and sharp exchange of barbs between the chief minister and NCP chief Sharad Pawar.

For the Opposition, NCP chief Pawar seemed to be the only saving grace who hit the hustings at the age of 79 and addressed a number of rallies in which he attacked PM Modi and BJP on a string of issues. However, the Congress and NCP failed to hold even a single joint rally in contrast to the joint rally held by the Prime Minister and Shiv Sena president Uddhav Thackeray in Mumbai on October 18.

While PM Modi addressed nine rallies across the state, Rahul Gandhi spoke at six public meetings. In his speeches, PM Modi dared the Opposition to bring back provisions of the now-scrapped Article 370 in their election manifesto. He also hinted at continued action against Opposition leaders "who are in jail" in corruption cases.

The BJP also sought to subtly raise the Hindutva narrative when the Maharashtra unit of the party raised the demand for conferring the Bharat Ratna for Hindutva icon Vinayak Damodar Savarkar in its manifesto.

The elections are also marked by an undertone of jostling for supremacy between the BJP and the Sena. On the last day of the campaign, CM Fadnavis and Sena leader Aaditya Thackeray held roadshows in their respective constituencies of Nagpur South West and Worli in Mumbai, while Union Home Minister Amit Shah addressed rallies in North Maharashtra. Sharad Pawar held a string of public meetings in Western Maharashtra.

The elections were marked by largescale dissension in the rank and file of the BJP as well as the Sena, with many candidates who were denied tickets contesting as Independents.

Prominent candidates in the fray are chief minister Fadnavis and his predecessors from Congress, Ashok Chavan, who is in fray from Bhokar in Nanded district, and Prithviraj Chavan seeking re-election from Karad South in Satara district.

In a first, Yuva Sena chief Aaditya Thackeray, son of Uddhav Thackeray, is contesting from Worli in Mumbai. The 29-year-old is the first Thackeray to make debut in electoral politics.

A total of 6.5 lakh polling staff is roped in for the October 21 voting, for which 96,661 polling booths are being put in place. A total of 1,35,021 VVPAT machines are also installed. Among the 288 constituencies, the maximum 38 candidates are in the fray from Nanded south seat and the minimum three from Chiplun in Ratnagiri district.

In 2014 elections, the BJP had won the highest 122 seats, Sena 63, the Congress 42 and the NCP 41 seats. Since then, two by-elections were held due to the death of two legislators Krushna Ghoda (Palghar) and Bala Sawant (Bandra east). The Sena managed to retain both the seats.

BJP leaders are confident that the NDA alliance would win 222 of the 288 Assembly seats.

Over 75,000 security personnel mobilised for assembly election duty in Haryana