Meryl Streep was paid a tribute at the gala with video montage which had excerpts of her roles in different movies she worked in over three decades. 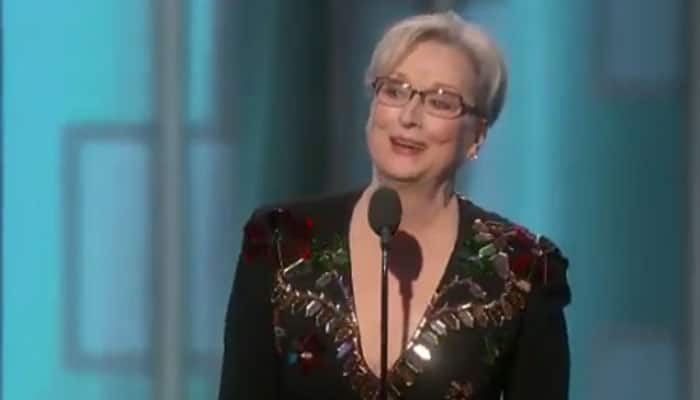 Los Angeles: Veteran Hollywood actress Meryl Streep, who was honoured with the Cecil B. DeMille Award at the 74th Golden Globe Awards, slammed US President-elect Donald Trump during her acceptance speech.

Streep was paid a tribute at the gala with video montage which had excerpts of her roles in different movies she worked in over three decades.

"Hollywood is crawling with outsiders and foreigners, and if you kick us all out, you'll have nothing to watch except for football and mixed martial arts, which are not arts," Streep said on stage while outlining her New Jersey upbringing, plus the non-Los Angeles backgrounds of Sarah Paulson, Sarah Jessica Parker, Amy Adams, Natalie Portman, Ruth Negga, Viola Davis, Dev Patel and Ryan Reynolds.

She echoed Hugh Laurie's comment about how the Hollywood Foreign Press Association is part of "the most vilified segments in American society right now".

"But who are we, and what is Hollywood anyway? It's just a bunch of people from other places. Where are their birth certificates?

Streep then noted that one "performance" stood out this year - that of Trump when he mocked a disabled reporter at a rally.

"There was nothing good about it, but it did its job. It kind of broke my heart when I saw it, and I still can't get it out my head because it wasn't in a movie, it was in real life.

"That instinct to humiliate when it's modelled by someone in a public platform, it filters down into everyone's life because it gives permission for others to do the same," the 67-year-old said.

"We need the principled press to hold power to account, to call them on the carpet for every outrage ... We're going to need them going forward and they're going to need us to safeguard the truth.

After calling for the press to stand up against Trump, Streep concluded her speech by quoting late actress Carrie Fisher.

"Take your broken heart, make it into art," she said.

Actress Viola Davis presented the honour to Streep, who got emotional while accepting it.

Akshay Kumar’s ‘Padman’: THIS legendary actor may have a cameo