1 killed, 23 injured in police firing on picketers in Tripura

A large number of people had gathered on the NH-8 at Panisagar and blocked it, demanding to call off the resettlement planning of the government. 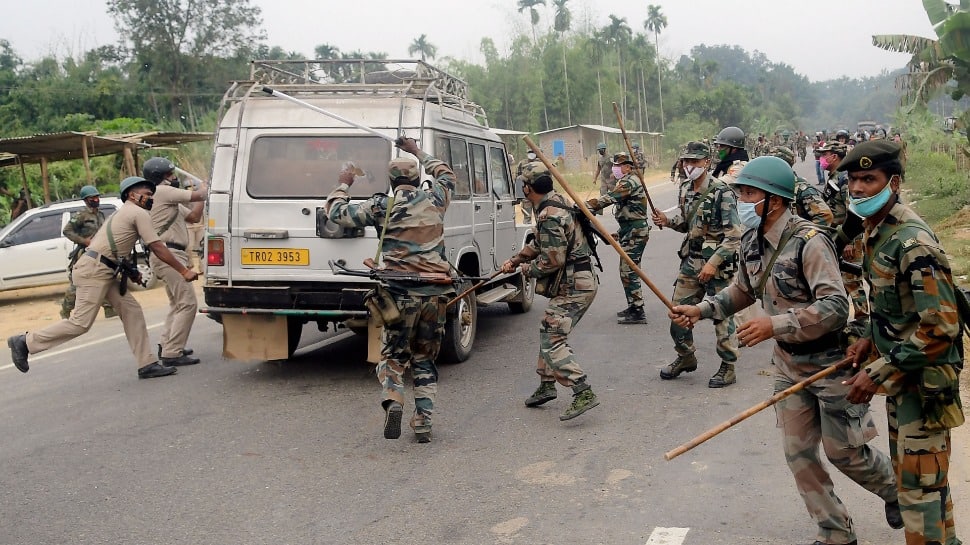 Agartala: One person was killed and at least 23 others were injured when police opened fire at the picketers, who blocked the Assam-Agartala National Highway at Panisagar in North Tripura district Saturday in protest against the resettlement of Bru migrants from neighbouring Mizoram, police said.

A large number of people had gathered on the NH-8 at Panisagar and blocked it, demanding to call off the resettlement planning of the government.

Locally known as "Assam Road", the NH-8 is often called the lifeline of Tripura as it connects the state with the rest of the country.

The Joint Movement Committee (JMC) comprising Bengalis and local Mizos had observed five days strike from Monday on the issue and the highway Saturday.

The state government has ordered a magisterial inquiry into the police firing at the NH-8.

The government has also announced ex-gratia compensation of Rs 5 lakh to the family of the deceased.

State Law Minister Ratan Lal Nath, who is also the cabinet spokesperson, said that probe would be conducted by district magistrate of North Tripura, Nagesh Kumar, and he would submit report "within one month".

The Bru issue had started in September 1997 following demands of a separate autonomous district council by carving out areas of western Mizoram adjoining Bangladesh and Tripura.

About 30,000 Bru tribals had then fled Mizoram due to the ethnic tension there and took shelter in refugee camps in Tripura.

The first attempt to repatriate the Brus was made in November 2009 by the Centre along with the governments of Tripura and Mizoram.

However, the effort had met with little success.

The centre signed a fresh agreement in January this year according to which the Brus who stayed back in Tripura relief camps will not be forced to return.

The centre sanctioned Rs 600 crore as a rehabilitation package for the displaced Brus as a final solution to the vexed problem after the agreement.

JMC chairman Zairemthiama Pachuau had told newsmen recently that the North Tripura district magistrate had assured that 1,500 families would be settled in the area.

"But now the government is trying to settle 6,000 families," he said.

Trouble started, when a large contingent of police and paramilitary, including Tripura State Rifles (TSR), were involved in a scuffle following an altercation over the withdrawal of the road blockade.

Police resorted to lathi-charge and later opened fire on the agitators, leading to the death of a 40-year-old Srikanta Das, a carpenter who was among the protests.

ADG Rajiv Singh said the police was compelled to fire in self-defense since the crowd had turned unruly and tried to snatch weapons from the security personnel.

"The crowd obstructed the National Highway since morning without permission. We tried to dissuade them from doing so and after they became violent, we tried mild lathi charge, blank firing but the crowd went unruly and tried to snatch weapons. Police fired in self-defense", the official said.

Singh admitted that one person was killed in the police firing and few others were wounded, but added at least nine Tripura Police and Fire Service personnel were injured in assaults by the protesters.

Sources said the injured were admitted at Panisagar and adjoining hospitals and two were rushed to GBP Hospital in Agartala for treatment.

However, Joint Movement Committee claimed police fired on the protesters who were agitating peacefully.

"Protesters were agitating peacefully. The police opened fire on them without any provocation. One died on the spot and many others were severely injured," Sushanta Baruah, convener of JMC, told reporters this evening.

Mizo Convention chief and JMC leader Dr Z Pachuau said picketers were fired upon by police without provocation, which led to retaliation from the agitators, resulting in injury to several picketers.

Police sources said NH-8 has been cleared of the blockade for movement of vehicles.