A landing craft utility (LCU) - the 100th warship built by the Kolkata-headquartered Garden Reach Shipbuilders and Engineers - was commissioned by the Indian Navy at Visakhapatnam on Monday, marking a big milestone in the shipyard`s history. 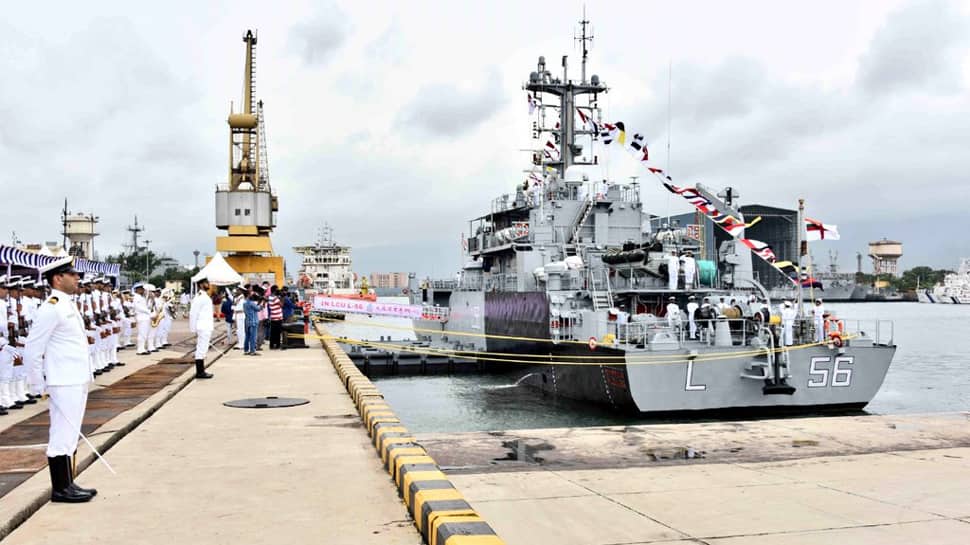 Kolkata: A landing craft utility (LCU) - the 100th warship built by the Kolkata-headquartered Garden Reach Shipbuilders and Engineers - was commissioned by the Indian Navy at Visakhapatnam on Monday, marking a big milestone in the shipyard`s history.

The sixth of the eight Mark-IV LCUs was commissioned by Eastern Naval Command chief, Vice Admiral Atul Kumar Jain at a ceremony attended by GRSE Chairman and Managing Director, Rear Admiral V.K. Saxena (retd) and other senior officials of the Indian Navy.

The entire design of the LCU Mark IV has been developed in-house by the GRSE as per requirements specified by the Indian Navy. The construction of the remaining two ships is progressing as per the schedule, a GRSE release said.

LCU are amphibious ships with the primary role being transportation and deployment of Main Battle Tanks, armoured vehicles, troops, and equipment from ship to shore.

Fitted with state-of-the-art equipment and advanced systems like Integrated Bridge System (IBS) and Integrated Platform Management System (IPMS), they can be deployed for multirole activities like beaching operations, search and rescue, disaster relief operations, supply and replenishment and evacuation from distant islands.

The LCU Mark IV class are fitted with close to 90 per cent indigenous content in line with the government`s `Make in India` initiative.

GRSE, which built India`s first indigenous warship - the INS Ajay - in 1961, was recently recognised as one of the "Next Fortune 500 Companies of India".

Over the last six decades, the shipyard has built around 780 platforms which include 100 warships for the Indian Navy, the Indian Coast Guard and the government of Mauritius.

As many as 67 of the 100 warships were for the Indian Navy and are varied in their range and scope. From anti-submarine warfare (ASW) shallow watercraft, frigates, missile corvettes, ASW corvettes, fleet tankers, landing ship tank, landing craft utility to survey vessels, offshore patrol vessels and fast attack craft - the repertoire is rich and varied.

GRSE has embraced infrastructure modernisation over the past decades with Rs 605 crore investment towards creating an integrated shipbuilding facility enabling concurrent construction of 20 ships.

Currently, the GRSE has a strong order book of over Rs 27,500 crore, equipping the shipyard with a deep pool of revenue-generating projects.

As many as 22 ships are in various stages of construction and are expected to be delivered to the Indian Navy and the Indian Coast Guard accordingly.