Desert locusts swarmed several districts in western Madhya Pradesh early on Wednesday morning. Millions of locusts were seen on trees and in Rana Heda village near Panbihar in Ujjain district reminding the scenes of pre-independence Rajasthan. 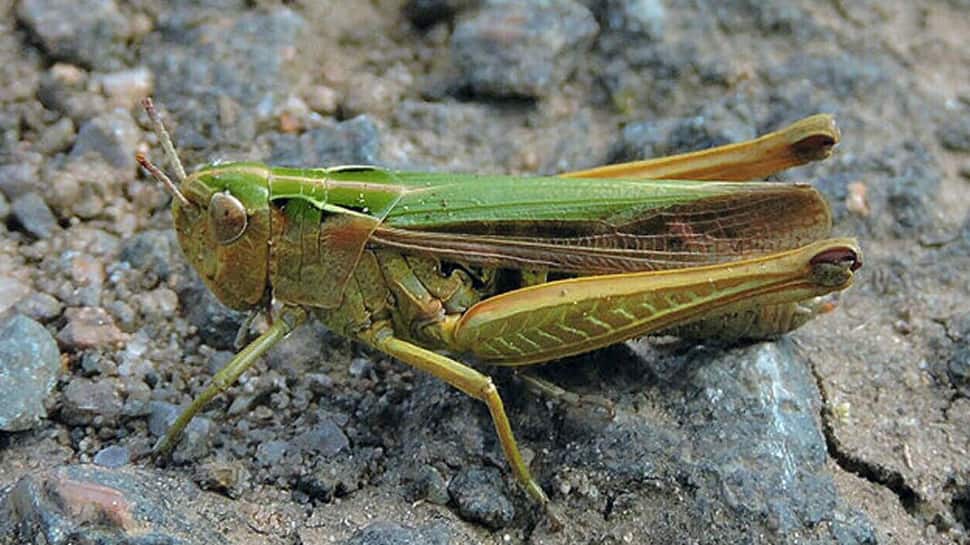 Millions of the insects descended at Ranhera village in Panbihar.The deputy director of Agriculture department Neelam Singh said a team from the department sprayed pesticides through fire tenders for three hours to cover a 12 square km area.

The department personnel said the swarms reached Madhya Pradesh via Rajasthan. Farmers of Ujjain, Mandsaur, Neemuch, Agar-Malwa and other districts of Madhya Pradesh are affected by swarms.

Another swarm attacked the region from the Neemuch side affecting vegetation in Hanumantia, Gurjar Khedi, Khor, Nayagaon, Kesharpura, Kanaka, Sagrana. There was panic among the villagers who have never witnessed such sight for several decades now.

Swarms of locusts descended on a long stretch of four districts in Madhya pradesh early Wednesday morning About 12 sq km area was completely covered by the swarms.

The farmers made loud noises to save the vegetation from them. They also lit torches to ward the swarms off. herd.

The Department of Agriculture says that 9 locust groups have gotten lively in the desert.

Locusts have reached the villages of Barkheda Gurjar, Arnia Borana, Sakrani Jagir, Dhaokkheda, Kuchadoud in Jeeran Tehsil. To chase them, the farmers lit a hearth and made noises. Locusts once more raided the Rajasthan facet in Mandsaur.

The locusts entered the Malhargarh tehsil and reached Bhaisakheda, Ninora, Khokhara, Amarpura. Here the farmers chased away the swarm by beating drums, loud music, and so forth.

Another swarm arrived in Dewas district and spread to Shajapur and Ujjain districts.

Bihar Board Class 10th result 2020 likely to be released on this date, check biharboardonline.bihar.gov.in