The MEA spokesperson said that India remains firmly convinced of the need for maintenance of peace and tranquillity in the border areas and the resolution of differences through dialogue. 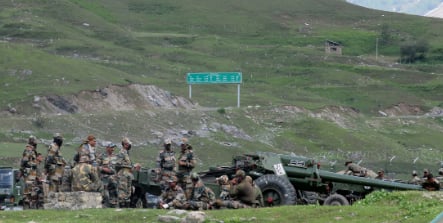 The statement said, "Indian and Chinese troops have disengaged at the Galwan area where they had earlier clashed on the night of 15/16 June 2020. 17 Indian troops who were critically injured in the line of duty at the stand-off location and exposed to sub-zero temperatures in the high altitude terrain have succumbed to their injuries, taking the total that were killed in action to 20."

"The Indian Army is firmly committed to protect the territorial integrity and sovereignty of the nation," the official release said.

The Ministry of External Affairs (MEA), however, blamed China for the incident and alleged that it tried to unilaterally change the status and "departed from the consensus to respect the Line of Actual Control (LAC) in the Galwan Valley".

MEA spokesperson Anurag Srivastava said both sides suffered casualties in the violent face-off and the Chinese side departed from the consensus to respect the Line of Actual Control (LAC) in the Galwan Valley. Srivastava said that India and China have been discussing through military and diplomatic channels the de-escalation of the situation in the border area in Eastern Ladakh.

"While it was our expectation that this would unfold smoothly, the Chinese side departed from the consensus to respect the Line of Actual Control (LAC) in the Galwan Valley. On the late evening and night of June 15, 2020, a violent face-off happened as a result of an attempt by the Chinese side to unilaterally change the status quo there. Both sides suffered casualties that could have been avoided had the agreement at the higher level been scrupulously followed by the Chinese side," the MEA said.

The MEA spokesperson said that India remains firmly convinced of the need for maintenance of peace and tranquillity in the border areas and the resolution of differences through dialogue, adding "At the same time, we are also strongly committed to ensuring India`s sovereignty and territorial integrity."

Meanwhile, UN chief Antonio Guterres has expressed concern over reports of violence and deaths at the Line of Actual Control between India and China and urged both sides to exercise "maximum restraint," his spokesperson said on Tuesday. Eri Kaneko, Associate Spokesperson for the UN Secretary-General, made the comments at the daily press briefing, according to a PTI report.

"We are concerned about reports of violence and deaths at the Line of Actual Control (LAC) between India and China and urge both sides to exercise maximum restraint. We take positive note of reports that the two countries have engaged to deescalate the situation," PTI quoted Kaneko as saying. Kaneko was responding to a question on the death of Indian Army personnel in a violent face-off in Ladakh's Galwan Valley amid escalating tensions at the LAC.

China, however, has not released any information on the casualties suffered by the People's Liberation Army soldiers.

China's official media today quoted the Chinese military as claiming that it "always" owned sovereignty over the Galwan Valley region and alleged that "provocative attacks' launched by the Indian troops resulted in "severe clashes and casualties."

The Indian border defence troops are "inconsistent with their words and seriously violated" the agreements both countries have reached, the consensus made during the army commander-level talks and harmed the relations of the two militaries and the feelings of the two countries' peoples, the Global Times quoted him as saying.

Colonel B Santosh Babu's mother is proud of her son's sacrifice but sad at losing her only son, who was martyred on June 15 night in the violent clashes with the Chinese troops at the Line of Actual Control (LAC) in Ladakh. Colonel Santosh Babu's family hails from Suryapet town in the Nalgonda district (Telangana).

Martyred Colonel's mother Manjula said, "I'm proud of my son who gave the supreme sacrifice for motherland but as a mother, I'm sad today." "He was my only son. I came across the news in the afternoon, while my daughter-in-law got the news in the morning," she added.

Colonel Santosh was the Commanding Officer of 16 Bihar Regiment and was posted on borders for over a year and a half. He is survived by wife Santoshi, a 9-year old daughter Abhinav and a 4-year old son Anirudh.

Among the three Army personnel who made the supreme sacrifice was Havildar K Pazhani, who hailed from Kadukkaloor village in Ramanathapuram district of Tamil Nadu. Havildar K Pazhani is the father of two kids and the family’s lone breadwinner. He had served the Indian Army for 22 years.

He added that Pazhani and his daughter had two school-going kids - a son who was studying in 6th grade and a daughter who was in her 3rd grade. The slain soldier’s wife is a degree holder and works as a clerk at a college in the Ramanathapuram district.

Tamil Nadu Chief Minister Edappadi K Palaniswami has announced a solatium of Rs 20 lakhs for the bereaved family and also offered a government job (based on qualification) for the next of kin.